A Word on Grantham's Choking Gesture

Share All sharing options for: A Word on Grantham's Choking Gesture 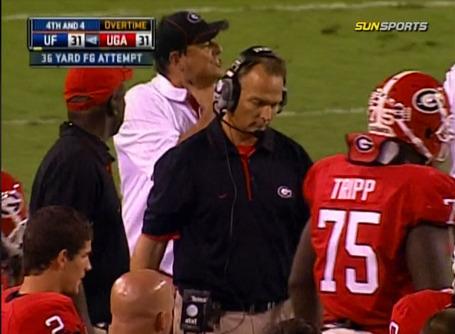 I promise we'll move away from the Florida-Georgia game today, but there's one left over bit.

Apparently, Todd Grantham did a choking gesture towards Chas Henry shortly before the game winning kick. The screencap above shows it happening, and Henry metioned it in his postgame interview:

"Some of their coaches on the sideline were over there giving me a little grief, saying I was going to choke," Henry told CBS' Tracy Wolfson on Saturday after his 37-yard overtime field goal gave Florida a 34-31 win.

The Gainesville Sun's Pat Dooley re-watched that part of the CBS telecast and determined that Grantham said, "You're gonna [bleepin'] choke. You're gonna choke."

Now, it's obvious that doing such a thing is below the expected level of decorum for a college coach making three quarters of a million dollars a year. It's not a firable offense, though. It's not even a fine-able offense, really. It was right at the end of a really intense game, and Grantham did something in the heat of the moment that I'm sure he regrets.

I personally don't think it's anything to get worked up about as long as Grantham doesn't make a habit of this stuff and an apology gets sent in private between the two schools. Personally, I'm more bothered by him swearing at an opposing player than the gesture itself. Mark Richt and Grantham have their normal media availability today, and I expect both to be contrite about it. If they admit it was wrong, that's all that the situation warrants right now.

Was it stupid? Sure. But let's not blow it out of proportion.