A Portrait of Offensive Malaise

Share All sharing options for: A Portrait of Offensive Malaise

Note: this has been updated to correct an error in analysis of the line.

A replay from the South Carolina-Florida game provided this image that sums up nearly all of Florida's offensive problems in a single frame: 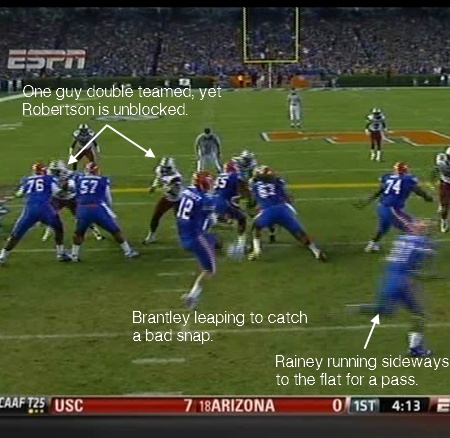 Let's count off all the problems...

The bad snapping problem is still there, the offensive line blows an assignment, it's yet another in a long line of plays with nothing but short options, and it's predictable because it's for the guy they had locked onto. Not only that, but the latest offensive wrinkle (in this case, the hurry-up) only worked for one game (Vandy) and is now hurting the team. The result of the play was an incompletion, as Robertson hit Brantley as he tried to throw and the ball sailed out of bounds.

I was going to write a long and in depth post about what's wrong with the Gator offense, but I don't really need to. This frame tells you all you need to know. The problems that arose in the first game haven't gone away, the O-line execution is bad, there's no imagination, and the band-aid from the previous game didn't stick.

South Carolina's defense played a heck of a game, and Ellis Johnson dialed up the right blitzes at the right time. I don't mean to take away a thing from what he and his guys did. But as you can see in this snapshot, all the Gamecocks needed was Robertson not to trip over his own two feet in order to disrupt the play.

But, when you make up an offense as you go along, it's not surprising that it doesn't work.