Don't Tune Into LSU-Florida for the Offense

Share All sharing options for: Don't Tune Into LSU-Florida for the Offense

We all already knew that LSU and Florida aren't exactly tearing up the field on offense this season. On a per-play basis, here's how they stack up against the SEC's best team and the nation's best player so far: 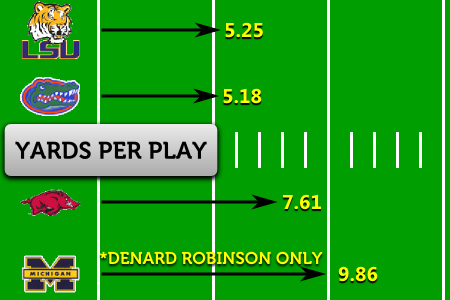 The Tigers and Gators are right around the same place at just over five yards a play. That's about two and a half yards behind Arkansas, who is tops in the conference at 7.61 yards per play. Denard Robinson is averaging a shade under 10 yards a play, nearly double what this weekend's combatants in Gainesville are managing.