Auburn Must Prove Itself on the Road

Share All sharing options for: Auburn Must Prove Itself on the Road

A year ago at this time, we weren't quite sure what to make of Auburn. The Tigers won their first four games convincingly, but stuggled with Tennessee on the road. They were 5-0, but no one knew what was to come.

In Week 6, Arkansas rolled Auburn in Fayetteville 44-23. Arkansas had lost a shootout to Georgia, got beat badly by Alabama, and had destroyed Texas A&M. The Hogs didn't look bad at the time, but you figured the Tigers would have kept it close. The following week, they found a way to lose 21-14 to Kentucky at home, and they got beat 31-10 in Baton Rouge the week after that. It was a mid-season slump that knocked Auburn out of the SEC West race and took some shine off of Gene Chizik's first year.

Now, we're heading into that part of the schedule again. Auburn has won all of its home games, but its one road contest, a 17-14 nail biter over Mississippi State, is no more convincing than 2009's 26-22 win over Tennessee was. Now it's time for the second road test, one that the Tigers flunked last year. In all, Auburn has had a much tougher time with Big Six conference opponents on the road than at home so far under Chizik: 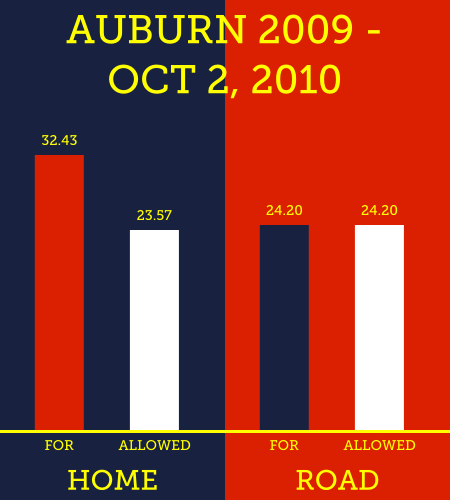 These numbers are versus BCS conferences only, with the neutal site bowl game versus Northwestern excluded.

Right now, the thought of Auburn losing at Kentucky seems a bit absurd. However, the 'Cats beat them last year, and you can see that Chizik's teams are much better at home. Auburn has defeated South Carolina, which looks like about a nine-game winner, already this year, but remember that Auburn beat a nine-win Ole Miss team at home by a larger margin in 2009. The win over Clemson was nice too, but again, Auburn beat a nine-win West Virginia team at home by more in 2009.

Auburn can't prove conclusively it's a completely different team than in 2009 this week, but beating Kentucky handily would go a long way towards doing that. Cameron Newton has been a big upgrade over Chris Todd, but the team still misses Ben Tate and the defense is still somewhat of a question mark. If Auburn wins but struggles, then it might just show that Auburn is merely a slightly improved version of its old self.