Share All sharing options for: Ballotry: Combined BlogPoll Draft Along with C&F's Half

In something that's kind of a rarity, particularly this early in the season, Year2 and I agreed on every single team that should be ranked. This is probably not a sign that we are both right; it probably means we are terribly wrong. Please help us, and fix our mistakes in the comments.

Ties broken: Ohio State-Arizona, which I gave to the Buckeyes because my resume ballot is the one that's costing them and it won't be if they go through the Big Ten as expected. Arkansas-LSU-TCU, with the SEC teams getting the "homerism" bonus and Arkansas getting the nod over LSU because -- well, you did see the end of the LSU game, right? Nebraska over Miami, because I think that by Week 5 you should have played someone other than Washington to be ranked. Michigan State over Stanford, because I had Stanford higher and don't have a problem with giving the Spartans the nod after their big win against Wisconsin. (And because Mark Dantonio is a South Carolina alum, if I'm being completely honest about it.)

My resume ballot is below. 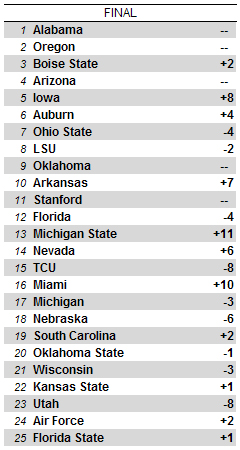 No major movers except Iowa; I actually watched that game side-by-side with Alabama-Florida and was pretty impressed with the Hawkeyes. I wouldn't call the game a rout (it's a joke), but it was till pretty good. Boise State moves up largely because of Ohio State's drop; they'll probably flip again when the Buckeyes' schedule really gets started.

Auburn benefits from schedule becoming more important. I dinged LSU for the mess in Baton Rouge this weekend, Texas isn't really important enough a victory to move Oklahoma one way or the other and I'm not sure why Arkansas is now in the Top 10. It has something to do with the Alabama win against Florida; I was initially skeptical about the "a, then b" argument Year2 made but decided to go that way for now.

Stanford was actually in that game against Oregon for a long time, so why would they fall? Florida is another story entirely, but it was still against the No. 1 team in the country, so this seems like a fair drop. Michigan State defeated a pretty solid Wisconsin team, Nevada will soon enough catch WACitis and TCU might actually move up as they play Utah, for example.

Yeah, I'm finally ranking Miami -- mostly because some of the other choices are no better. Nebraska's bye and weak schedule so far can't keep them in the Top 15 of a resume ballot at this point, but they'll probably be back soon enough. South Carolina moves mostly because of other teams falling past them, and Oklahoma State defeated Texas A&M but looked fairly awful doing it.

This is the rest of the teams that are almost rankable, but since there are only about 19 or 20 teams that deserve to be ranked, here they are. Utah's schedule needs some help from TCU and the like. The others could go either way at any point.