Combined Week 9 BlogPoll Ballot and the Other Half

Share All sharing options for: Combined Week 9 BlogPoll Ballot and the Other Half

As usual, you are advised to not read our combined BlogPoll ballot while eating.

Ties broken: Boise State-TCU-Missouri because Boise was there and should keep its place if we're just figuring out ties, while both Year2 and I thought TCU was No. 5. Ohio State ahead of Nebraska because they had the highest ranking on either ballot and the Buckeyes should only drop so far after winning by 49. Iowa ahead of Stanford again for the highest individual vote reason.

After the jump: My half of the ballot.

I'm not quite as sold as Year2 that the case for Auburn is open-and-shut -- the Tigers and the Ducks are pretty much 1 and 1A as far as I'm concerned -- but I think they do have the slightly stronger resume at this point. Not that I see either team losing ground if they win out, and not that I see either team losing for the rest of the year. Michigan State is the only team I'll feel particularly sorry for if they end up locked out of the BCS National Championship Game, because they play in by far the most difficult conference of any of the "other" undefeated teams. And an example of that is Missouri, which plays in one of the worst divisions in major college football outside of the SEC East, but has a win over the best team in the Big XII South to bolster their resume for now. TCU is the best of the midmajors and probably will be for the rest of the season, with the possible exception of the very end of the year if Boise State defeats Nevada convincingly.

Boise State continues to hang around, in part because of two teams that were ahead of the Broncos in last week's poll losing. Actually, I'm fine with keeping Boise in the Top 10 as long as they continue to annihilate their cupcakes and the Virginia Tech win regains some of its value. Alabama also stays put after waxing what is basically a cupcake at this point. Oklahoma and LSU don't fall too far after losing to members of the Top 5. Wisconsin also stays put after a one-point win against Iowa, which is probably fair enough.

Arizona moves up five after waxing a pretty solid Washington team. Utah actually improved this week, probably because I look at the Iowa State victory a little bit differently than I did last week. Nebraska moves up after handing Oklahoma State its first loss, but the Cornhuskers need a defense. Florida State drops because -- well, I don't really know to be completely honest with you. Looks like the Ohio State drop is largely my fault, so I'll defend it by pointing out that the Buckeyes' best win is Miami and I'm not really all that impressed by Miami at this point, and nothing else on Ohio State's resume looks really good right now.

Stanford moves way down at least in part because their win against UCLA is looking worse right now. South Carolina moves up largely because of teams ahead of it losing ground. Iowa's resume is pretty weak when you look at the teams they've actually defeated. Same is true with Arkansas. Oklahoma State losing means their resume really starts to affect their ranking.

Just to get the last two out of the way: After No. 23 this week, I was basically throwing darts at a dartboard in my head. Baylor is either a decent team or is benefiting from the Big XII South's case of SEC Eastitis. Nevada has returned. Largely because the teams ahead of them lost, but a return is always a return. Mississippi State falls to No. 23, because that's what happens ina  resume ballot when you defeat UAB by five. 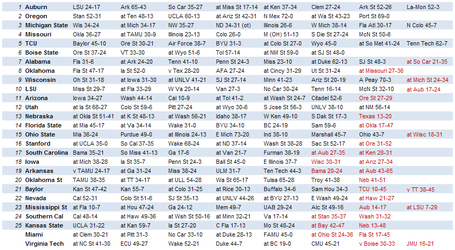