Combined BlogPoll Ballot and the Other Half

Share All sharing options for: Combined BlogPoll Ballot and the Other Half

I think we would all probably like the ballot to end somewhere around No. 20, but that is against the rules.

Ties broken: Ohio State-Arizona, because the ballots agreed on Ohio State but one had Arizona substantially lower than the other; Iowa-Missouri-Stanford, based on which team appeared highest on either ballot; Utah-Florida State, because Year2 had Utah higher, and I prefer it that way anyway; Arkansas-West Virginia, because of the "homerism" bonus and because I still hate West Virginia being ranked; and Virginia Tech got onto the ballot instead of Kansas State, something I'm reluctant about because Kansas State hasn't lost to an FCS team but went with because Tech was the only team both of us ranked.

Arguments against any of that or my half ballot, presented below, now accepted in the comments. As for Year2's half ballot, it's here.

Most of these teams have at least one quality quality win and some combination of other relatively solid wins. Two of them still haven't faced an FCS team this season, which is obviously a boost to strength of schedule. I'm not sure I really believe in LSU or Oklahoma, but it's hard to rank them much lower when they're still winning the games.

This group includes all but two of the remaining undefeated teams. Boise is beginning to drop down the list as their "other" games come onto the schedule and Oregon State looks worse each week. TCU has pretty much the same problem. Alabama is the best one-loss team and Wisconsin has a great win for the year. Missouri needs to defeat some good teams -- and they get a chance this weekend -- to stay in the Top 10.

Oklahoma State and Utah are the remaining undefeated teams, and they have a lot of wins by sometimes impressive scores over less than impressive opponents. Stanford, Ohio State and Florida State are some good one-loss teams that have at least one quality win.

Yes, I hate ranking Southern Cal, but the win over California was impressive and there aren't a lot of teams that actually deserve to be ranked. Arizona and Iowa are probably better than their resume shows right now and should eventually move up. Mississippi State?!?

If South Carolina didn't have the win against Alabama, they wouldn't even be close to being ranked right now. Same for Texas and its win against Nebraska. Kansas State still has a few good wins, and Arkansas needs to learn to play defense. As for Virginia Tech ... ugh. I just don't have another team that's a good option right now. 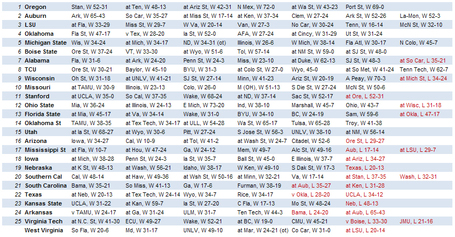