Steve Addazio Has One Too Many Jobs

Share All sharing options for: Steve Addazio Has One Too Many Jobs

I haven't jumped on the Fire Steve Addazio bandwagon. I doubt I ever will. He's a great recruiter, by all accounts a likeable guy, the players love him, and he stepped in and ran the program when Urban Meyer had to deal with his health crisis.

I do think he's got one job too many. He can't be both the offensive coordinator and offensive line coach.

Last Saturday's game is the tipping point that moved me here. I've suspected it since midway through last season. Granted they were breaking in two new tackles, but the offensive line had a noticeable drop in effectiveness from 2008 to 2009 that never got fixed. This off season Addazio bragged about his line constantly, about how it was one of the best in the country. Instead, it has been flat-out bad. Injuries held the line back in the first two games, but not since. 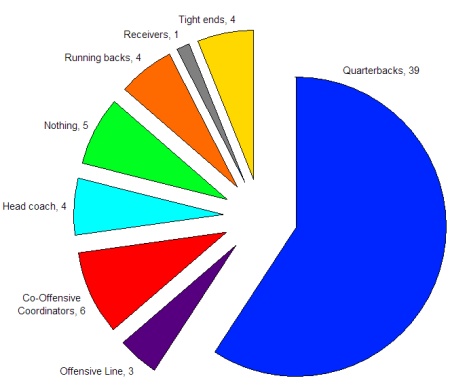 Four head coaches are their own OC, and six schools have co-coordinators to share duties. Only three of the 56 remaining offensive coordinators are also the line coach: Addazio, Wake Forest's Steed Lobotzke, and Ohio State's Jim Bollman. Addazio's offense has been easily the worst of the three. It's possible to do both jobs well (Bollman has been fine), but Addazio's not managing it.

It's time for him to be one or the other. If he's to be the coordinator, then give someone (like RBs coach Stan Drayton, whose running backs have become fumble machines all of a sudden) his walking papers and hire a line coach. Addazio has had some bright spots as a coordinator (Kentucky '09 and '10, Georgia '09, the Sugar Bowl, the second half vs. Mississippi State last weekend), and he might become consistently good with more time as just the coordinator. If his best fit is as the line coach, and he did put together a fantastic line in 2008, then someone else ought to run the offense.

All the whining about Addazio has covered up some points, such as how good Mississippi State's defense has become (it also held Auburn to just 17 points, and it's worst scoring defense day was caused by five offensive turnovers), how sloppy Florida's running backs have been with the ball, and how poor John Brantley's accuracy has been more than about 15-18 yards up field. Plus, three of Florida's four second half drives on Saturday went for 60 yards or more, but one ended in a fumble and another with a missed field goal. You can't pin those two on Addazio.

That said, Florida didn't lose three in a row in 2005 despite an injury plague. It won a national title with a questionable running game and no reliable kicker in 2006. And at no point in the last five seasons did a head coach try to run out the clock for an entire half against Florida because he was confident in the Gators' likelihood of shooting themselves in the foot like Dan Mullen did.

Florida has a lot of problems on offense. You don't end up 91st in the nation in total offense if only one or two things are wrong. But the two biggest issues have been offensive line failings and play calling. Both of those are in one guy's job description. It's time to divide up the responsibilities.