Aaron Murray Is On His Way to Being Richt's Best Quarterback

Share All sharing options for: Aaron Murray Is On His Way to Being Richt's Best Quarterback

I re-watched the Tennessee-Georgia game over the past couple of days, but I didn't really see enough there to expound upon at length. It was a Murphy's Law kind of game for Tennessee, who was hopelessly outmanned thanks to injuries and pre-existing depth problems. Sure Georgia finally put a full game together, and that's notable. Beyond that, I'm not sure what else to say about the game itself.

However, Aaron Murray once again stood out for the Bulldogs as he has in every game I've looked at closely. He will make some plays that remind you he's still a freshman from time to time, but overall, he plays beyond his years. His decision making is better than Matthew Stafford's was at this point in his career, his arm is stronger than David Greene's was, and he's got more mobility than Joe Cox did.

In short, Murray has what it takes to be Mark Richt's best quarterback at Georgia yet. That fact is reflected in his passing efficiency, which compares favorably to his peers: 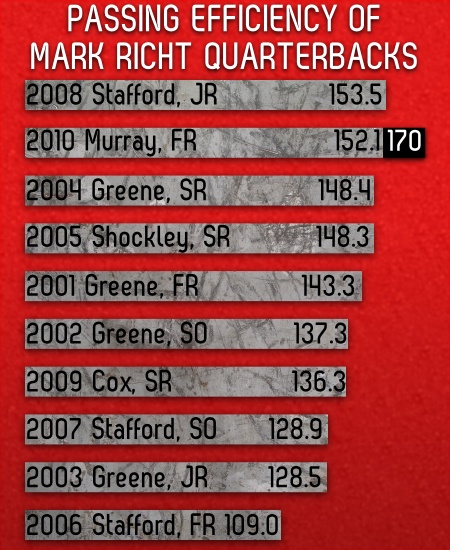 Granted he's still got some tough defenses to face yet, but Murray is neck-and-neck with Stafford's junior year so far. The little extension on Murray's line shows what his passing efficiency has been in the two games where A.J. Green has played. Not that Colorado and Tennessee are a murderer's row of defenses, but he has seen a definite uptick in performance with his best receiver on the field.

I'm not sure if he can keep it up, especially considering that Murray has played with a more dysfunctional run game than Georgia has had in most years and he's losing Caleb King for two weeks. He's got a lot of grit and pluck though, and if he improves as his career goes along, he's got a chance to be the best signal caller in Athens yet.