A lot of guys have been pumped as Heisman candidates this year, and even I spent a lot of my Auburn story earlier today gushing about Cameron Newton.

One guy who has gotten some Heisman pub more so in the past than this year is Colin Kaepernick. He certainly qualifies as a candidate in the taking-team-to-unheard-of-heights mold, as Nevada is ranked this year for the first time since 1945. He also fits in the lifetime achievement award mold (see: Crouch, Eric) because he, more than anyone else, is why the Pistol offense is exploding in popularity. His coach Chris Ault invented it in 2005, but Kaepernick is the guy who makes it sing.

Now, Nevada has an even worse schedule than Boise State does, so I'm not telling you that he's got a chance to win it. Taking down the Broncos is about the best he can hope for this year as far as big moments go. However, just consider what he did to Cal's defense.

Cal is eighth in the nation in total defense and 17th in scoring defense. The only SEC team ahead of the Bears in both is LSU. Yet, take a look at how Kaepernick and Nevada shredded the Bears in Reno earlier this year: 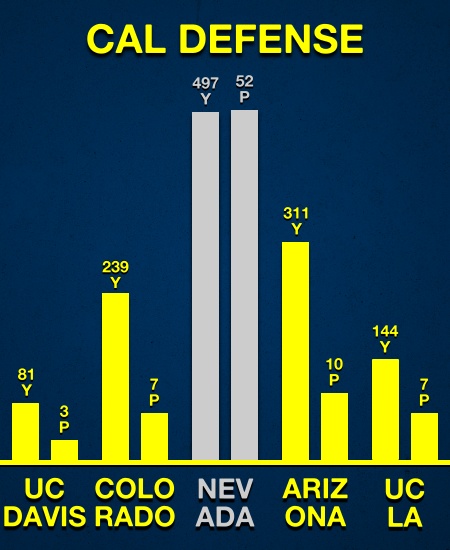 That's not exactly a murderer's row, and the game was not in Berkley. However Cal went on the road the next week and largely silenced Arizona's great offense and would shut down the UCLA team that tore apart Texas's defense (and who is now running Nevada's Pistol) two weeks later.

No SEC team has or ever will face Kaepernick, but he's now a senior and is not exactly an NFL prototype player. If you can, catch a Nevada game before the season closes. He's awfully fun to watch.