Ballotry: Halves of the BlogPoll and SEC Power Poll Ballots

Share All sharing options for: Ballotry: Halves of the BlogPoll and SEC Power Poll Ballots

The actual ballot must be cast tomorrow morning, so you've got today to convince me. (And anyone else who might cast their half of the ballot in time.) But here's what I've got so far, for your reading and discussion. (By the way, the resume chart I've put together is after the jump. I changed the format to something resembling how some other people have done it; I think that makes it easier for you to read, and I know it's made it easier for me to compare the teams.)

This is the difference between a resume ballot and a more conventional Top 25. I sincerely doubt that LSU is the third-best team in the country or that Oklahoma is No. 4. But they have by my estimation played the No. 3 and No. 4 seasons against their resumes. To answer the Boise's-schedule-is-a-joke complaints: Yes, it is. But the Broncos still have one of the best two-win combos in the country until other folks start playing their conference schedules, and Boise is blowing out the teams they should blow out. As they continue to ring up cupcake wins and teams like Ohio State play teams that actually play football, these rankings will change. But the rankings only reflect was has happened until now.

I went back and forth on Alabama. I think Alabama's resume might be a bit stronger than South Carolina's, but the Gamecocks won the head-to-head matchup. I could be persuaded to flip them, but it's going to take a pretty solid case to do so. Michigan State is one of the most underrated teams in the country, but this could again be me taking up the cause of a fellow South Carolina alum. Auburn gets the nod at No. 9 for a pretty strong schedule and, of course, the win against South Carolina.

Alabama is not only hurt by the loss to South Carolina, but also because the win against Florida was devalued when the Gators lost to LSU. Utah is already beginning to slip in my estimation because of the schedule. Florida State benefits from just annihilating Miami.

If I were going on how good I thought teams are, there are three in this block that would be higher: Arizona, Arkansas and Iowa. Arkansas' wins against Georgia and Texas A&M aren't worth that much right now, and the "value" of their loss is also headed in the wrong direction. Iowa's win over Penn State now looks about as good as stock in Lehman Brothers, which in turn hurts Arizona.

These are some of the few teams that actually almost deserve to be ranked. I still do not understand why anyone is voting for West Virginia, a team whose only BCS win is against Maryland and whose other wins are against Coastal Carolina, Marshall (by three in a game they probably should have lost) and UNLV. 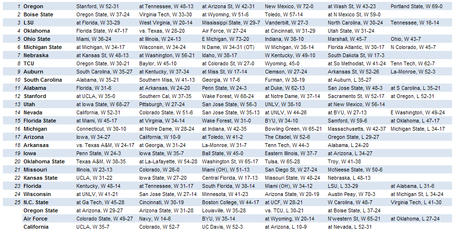 Click on the chart to actually make it legible.

1 Auburn
No one has played better on a more consistent basis than Auburn this year. We knew a team from Alabama would be the early front-runner, we just chose the wrong one.

2 LSU
No, nothing Les Miles does in the last minute of the game makes sense. But you can't argue with the results.

4 Alabama
They lost to a good team that had a bye week and was playing at home. That's only a surprise if  you're a great team to begin with.

5 Arkansas
Still lost to the Tide at home, so I don't buy them defeating Alabama on a neutral field. Yet.

6 Florida
Who are you and what have you done with Urban Meyer?

7 Mississippi State
I still think that this is a good team that just ran into some overrated teams earlier. And no one should be surprised if Dan Mullen wins in his return to the Swamp.

8 Georgia
I do not believe that one win against Tennessee means this team is fixed. But it's close enough for now.

9 Ole Miss
If they win against Alabama this weekend, we can assume that the chaos will not end this year.

10 Kentucky
Almost put them ahead of Ole Miss, but not yet.

11 Vanderbilt
The Dores can't even win gracefully without messing up.

12 Tennessee
Lost by 27. To Georgia. Should be here for quite a while.