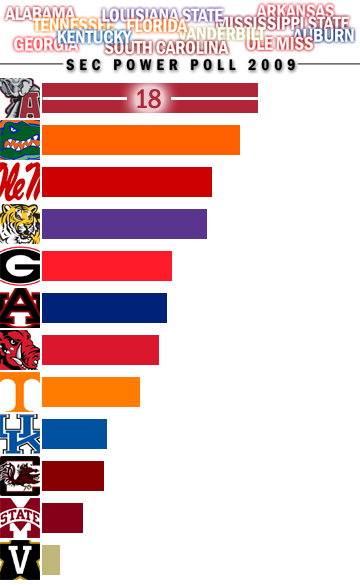 Alabama is a unanimous first-place choice in light of, you know, the football season. Florida is No. 2 in another unanimous vote.

The Penn State defeat of LSU appears to be just enough to help the Rebels overcome their own subpar "win" against Oklahoma State in the Cotton Bowl and place third in the poll, though most voters would point out that there is rather large difference between No. 2 and No. 3.

There aren't really that many counterintuitive points, except -- and I know I'm going to get accused of homerism here, but here goes -- Kentucky? Sure, South Carolina went 7-6 against the fourth toughest schedule in the country per Sagarin while Kentucky had the same record against the 35th most difficult slate; the Gamecocks defeated the Wildcats head to head and Kentucky just lost to a team that South Carolina defeated by 17 points in its last regular-season game a few weeks earlier. But Kentucky would defeat South Carolina if they were to play on a neutral field today because ... well, because. Tennessee fans have a complaint about Georgia, I suppose, though there are intervening events that might make you reconsider that. (I know: South Carolina's late-season issues. But they defeated Clemson in the last regular season game and Kentucky lost its last two games -- so, your point?)

The other unanimous team is Vanderbilt. Of course.

That wasn't the prettiest national-title-game performance I've ever seen by a long shot, but it got the job done. The Bama dynasty is back for as long as Nick Saban sticks around.--Hey Jenny Slater

Does anyone else think Alabama scored that last touchdown just to erase any doubt that a true freshman QB had them on the ropes?--The ACC & SEC Blog

Simply the best, but "what if's" will haunt them forever.--A Sea of Blue

I'd like to see a rematch between Florida and Alabama right now, but we don't have that opportunity. I'm not sold that Alabama was head and shoulders the better football team.--Ghost of Chucky

If it's possible to have a disappointing 13-1 season, the Gators qualify.--Get the Picture

I think it is safe say the Gators will be the most talked about program again this off season.--The ACC & SEC Blog

How much better the season would have turned out if Dexter McCluster had been the centerpiece on offense from the get go?--Get the Picture

The Rebels finished strong after starting the season with high expectations and the paradoxical situation of having everyone believe they were overrated. Mississippi began 2010 by becoming the first team to win back-to-back Cotton Bowls since Notre Dame did so at the end of the 1992 and 1993 seasons. Could next fall see the Rebs become the first team ever to win three consecutive Cotton Bowls?--Dawg Sports

The Tigers an ugly game to Penn State in the Capital One Bowl. Are the vultures beginning to hover around Les Miles?--Garnet And Black Attack

"We didn't win?  INCONCEIVABLE!!! - Coach Miles, you keep using this word.  I do not think it means what you think it means." (Princess Bride)--Orange and Blue Hue (In its final vote for the SEC Power Poll. Thanks to O&BH for being involved since the start.)

If that field weren't a reconstruction of the first half-hour of Saving Private Ryan, LSU would have had the game.  Talented squad and could make a storng push next season.--Red Cup Rebellion

Things were pretty bad in Athens this season. To counter that, they're still looking for a Defensive Coordinator.--Ghost of Chucky

The bad news is that between the new QB, defensive losses, and fresh DC, the Dawgs won't be a whole lot better next year than they were this year. The good news is that they weren't that bad this year.--War Blog Eagle

Tried every way they could think of to lose the Outback Bowl, which sort of fits with the way they played over the 2nd half of the regular season, too. But I'm scared of what they could do next year.--Hey Jenny Slater

Credit Gene Chizik. Now, I'm not necessarily sold on the guy, just yet, but he took Auburn to a January bowl game which was further than any Auburn fan thought he would.--Ghost of Chucky

Sure, the schedule helped, but it's hard to argue that this team didn't overachieve, a credit to the players and coaches.  I'm not sold on a future with Roof as the defensive coordinator, though.--Get the Picture

The Hogs would have been a great Conference USA team this season, but it's hard to get very excited about an SEC team that fails to win a single game in an opponent's  stadium.--Get the Picture

Did good things down the stretch and with news of Ryan Mallet coming back,  their 2010 should be better.--Leftover Hot Dog

While there were some real bright spots here and there, on the whole I am not so sure that things will be much better next season for the Hogs, until they start playing just a little defense.--Gate 21

Laid a rather unfortunate egg in the final game of Kiffin's rookie season, but he says it was all part of the plan. Just like not having a quarterback next year.--Hey Jenny Slater

There were growing pains for sure, but Lane Kiffin's first season in Knoxville can go down as a success.--Ghost of Chucky

I admit it; I was skeptical about Lane Kiffin, but he sure showed me. In 2008, the Vols were a team that recruited at a high level, played solid defense, and lost seven games. Now, thanks to the turnaround engineered by the Coaches Kiffin, the Vols are a team that recruits at a high level, plays solid defense, and loses six games! Yeah, all right, the Big Orange went 7-6, but can anyone deny that Tennessee is, hands down, the best 7-6 team in the SEC? Well, then, mission accomplished! Lane Kiffin proves again that the surge the plan is working.--Dawg Sports

With Vandy, Georgia and South Carolina at home, plus the usual high school teams out of conference, Joker Phillips might get to 7 wins in his first season.--Alligator Army

Considering where the Cats were when Rich Brooks took over, I call 4 bowls in a row big time improvement. As for the future, well, it's not like Joker Phillips hasn't already been there and done that.--Gate 21

Rich Brooks has moved along to the trout stream, but Phillips will get no honeymoon.  Coach-in-waiting is great, but the fan expectations at Kentucky have changed.--A Sea of Blue

This program is stuck in a seemingly endless loop -- good start, followed by the inevitable second half collapse (2-5 over their last seven games).  It's always next year in Columbia.--Get the Picture

Started the season 5-1 and finished 2-5. Does anyone really think that Spurrier could win a division title at South Carolina?--Alligator Army

The Ole Ball Coach can't be satisfied with the Gamecocks' performance, and most are hoping that SC will take a giant leap forward with the void of SEC experience next season.--Over the Pylon

Don't know how much progress they can reasonably expect to make next year without Anthony Dixon to rely on, but I'm not ready to count them out of a bowl bid, either.--Hey Jenny Slater

This time next year we should be talking about how Mississippi State did in their bowl game.  If not, it will be a real disappointment in Starkville.--The ACC & SEC Blog

The argument that MSU should be above Kentucky is clearly logical. We have no use for that here.--Over the Pylon

Vandy Football in 2009 was a oxymoron.--Leftover Hot Dog

The '09 season is over... that's the only good thing to come from this year for Vandy. Well.. that and there's nowhere to go but up. Except stay stagnant. Which is what will happen.--Over the Pylon

Wait ... is Ted Cain still employed? He can't be, but I don't remember hearing anything. Did I miss it? ‘Cause I mean ... Ted Cain.--War Blog Eagle