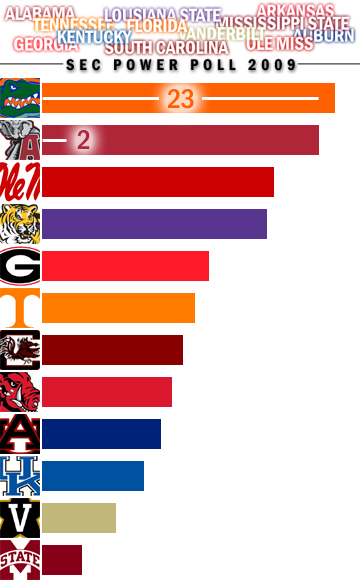 No major surprises for our first week poll, though some bloggers had trouble making sense of the middle of the conference and refused to comment specifically on each team.

I'm not going to do any individual comments here since only South Carolina, Alabama, and Georgia faced legit competition.--Roll Bama Roll

It's hard to get a sense of how good any of the teams truly are. The only teams that played any kind of opponents were South Carolina and Georgia (and there is certainly a case to be made that only UGA did). LSU struggled with a Washington team that had lost 14 straight, and 3 teams played FCS teams that were over-matched from the word go (hear that ACC?). Polls this early are always inexact and this year's Week 1 SEC poll is no different. There should be a lot of movement after this Saturday's games. --Vanderbilt Sports Line

The rest of our bloggers explain after the jump.

Tebow didn't get hurt. That was about all that could have happened against Charleston Southern.--The ACC & SEC Blog

We learned nothing from their romp over Charleston Southern, but there aren't many questions that the Gators have to answer.--The Dead Guy's Rebelations

Urb and the Gators failed to cover the 63.  Does that mean Meyer has a soul?  Or, was that "tremendous" Charleston Southern defense just that tough?--Georgia Sports Blog

No team in the league looked better against a tougher opponent than the Red Elephants, led by Brodie Parker McElroy. (I know that's not his name, but it might as well be.) It was a slugfest, as expected, but ‘Bama closed the deal.--Dawg Sports

That was a pretty good defense that the Tide's just unloaded 500 yards on. If I were a Tiger or Rebel fan, I'd be real, real worried about what I saw in the Georgia Dome on Saturday night.--Hey Jenny Slater

Wow.  What a defense.  The Tide's defenders are all gigantic, fast, and able to play through gunshot wounds.  Everyone they face will have their hands full.--Red Cup Rebellion

Still impressed even though it took Snead late into the fourth quarter to get going.--Track Em Tigers

If Snead gets off to a start like that against a decent SEC opponent, things won't turn out so well.--Get the Picture

Didn't look like a top 5 team in the country when they played Memphis... Look for Ole Miss to lose at least 2 in SEC Play.--Hog Database

They didn't look all that great against Washington but going cross-country to play a Pac-10 team, even one that was awful in 2008, counts for something and helps me excuse the rather poor showing.--Save the Shield

They won, but they were handily outclassed in nearly every statistical category by a team with a rookie head coach and a 14-game losing streak. Hope it was just the jet lag, Tigers.--Hey Jenny Slater

LSU faced a tough opponent about a billion Cajun miles from home. Washington is far better than they were last year. A nice win on the road for "the Hat."--Gate 21

It took 51 years to get Georgia out of the southeast. It may take 51 more after a loss.--Over the Pylon

It's hard for me to admit, but I was rooting for UGA Saturday. I was also acting like a Dogs fan and cursing at Joe Cox. That said, the Dogs had 30 rush and 30 pass attempts. Balance is nice, but not when the QB has "flu like symptoms."--Alligator Army

So I guess "Leadership" and "Team" don't make up for losing two first round picks on offense.  The o-line was very disappointing considering the starters they had back. --The ACC & SEC Blog

It was Western Kentucky.  Take a deep breath.--And The Valley Shook

Don't care who you are 600+ yards of offense.  Lane might have reason to run his mouth this week.--Leftover Hot Dog

They always seem to start the year with this exact game: a brutal offense with great defense.  However, there were signs of life from Garcia and I wouldn't write the offense off just yet.--And The Valley Shook

The Palmetto State Poultry fielded an anemic offense but a stout defense. The contestants' aversion to scoring in last Thursday's contest should not obscure the fact that the Big Chickens once again look solid on the side of the ball that wins championships . . . well, at programs other than theirs, at any rate.--Dawg Sports

A big Dead Guy congratulations to the Gamecocks and Wolfpack for their almost perfect reenactment of last year's Auburn/Mississippi State game. A win is a win is a win, but that was ugly.--The Dead Guy's Rebelations

They are not exactly flying under the radar, but there is no team that scares me more right now.  A total blank slate.--And The Valley Shook

I didn't realize that Missouri State even fielded a football team and judging from their offensive numbers, neither does Missouri State.--Gate 21

A win, but a sloppy one for the Tigers. Lost fumbles, massive penalties, and a failure to come out early on the throat of the opposition.--Over the Pylon

Auburn quietly had one of the more impressive openers this week, gaining more than 500 yards against decent mid-major Louisiana Tech.--Garnet and Black Attack

The Auburn Tigers looked solid against an inferior opponent, just like Tennessee. The War Eagle could actually be a surprise to those in the West. Just like how to spell "Chizik" is to the Auburn AD.--Gate 21

Miami OF OHIO (they hate that) may have been a 2-10 MAC team, but those of us waiting on Kentucky to finally, truly regress from the Woodson years are still kind of waiting.--War Blog Eagle

While there are still plenty of reasons to doubt this Wildcat team, there's no doubting CB Trevard Lindley. He's a stud.--The Dead Guy's Rebelations

A shutout against a weak team is more impressive than giving up points to a weak team.--A Sea of Blue

If there's one I-AA skull-crushing that I thought was worth noting, it was Vandy's, because when does Vandy crush anyone's skull?--War Blog Eagle

Actually pretty impressive, especially defensively.  I just can't move them up yet, but this team bears watching.--A Sea of Blue

The Commodore performance is along the same lines as Arkansas' and Mississippi State's: do that against a bowl team and you'll impress me.--Red Cup Rebellion

Played patty cake with Jackson State for a half before realizing that they were a FCS program.--Ghost of Chucky

It's a good start.  For Mississippi State.--Get the Picture

It is possible that an entire generation of State fans didn't know the Bulldogs could score so many points and remain within the rules of football.--Georgia Sports Blog