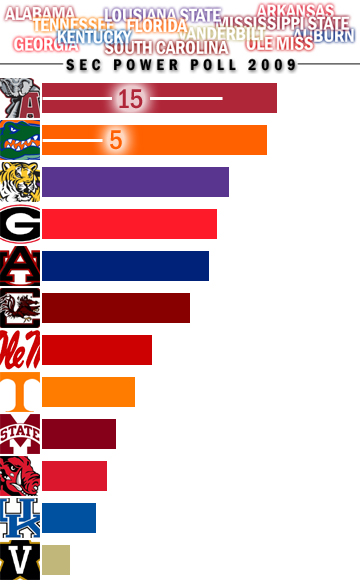 A change at the top this week as Alabama takes No. 1.

You win, universe: I wish they still had John Parker Wilson.--War Blog Eagle

In 2008, they ran the table in the regular season with a great defense and a serviceable QB. This season, their defense is still dominant and a QB to match (McElroy leads SEC starters in efficiency).--Alligator Army

The Alabama defense made Ryan Mallett look a whole lot more like a first year SEC starter this week. I thought McElroy would not be better than JPW -- so far I am being proven wrong.--The ACC & SEC Blog

Hmmm ... why has no one else figured out this ‘Hey, maybe we should put the tiny, ludicrously small guy in the middle of the punt block?' thing?--War Blog Eagle

The Gators' first quarter against Kentucky was the most dominant performance I've seen from an SEC team this season.--Get the Picture

Alabama may be more complete, but somebody has to stop the Florida offense.--A Sea of Blue

The biggest underachievers in college football are lucky to be 4-0 right now.--Roll Bama Roll

The worst number four team ever? No, nevermind, that title was claimed by Ole Miss last week.--Track Em Tigers

Barely hung on against MSU, but an SEC road win is impressive no matter who it's against.--Over the Pylon

Does any receiver in the country mean more to his team than A. J. Green?--Garnet And Black Attack

The defense is slowly, very slowly, getting better.  Not that that's saying much.--Rocky Top Talk

One week it's fire (DC) Willie Martinez; next week it's fire (OC) Mike Bobo. If Georgia stops the turnovers I think they are fine, but four games in and they have not yet.--The ACC & SEC Blog

Gave up more points than they should have against Ball State, but most of it was in garbage time. Now comes the big test: whether Malzahn's spread attack can survive Monte Kiffin's meat grinder.--Hey Jenny Slater

Another blowout win over a patsy, but at least it was convincing.  Two things that I'd never thought I'd see in a sentence together:  "Chris Todd" and "5 TDs."--Georgia Sports Blog

Auburn's Gene Chizik is making the Auburn AD look like the smartest guy in the room.--Leftover Hot Dog

I'm not as sold on this team as many seem to be. Yes, the defense is good. But that offense is still shaky.--Get the Picture

Is the Chicken Curse broken with a win over a top 5 team? I thought ESPN's Craig James' comment about the energy Spurrier had this year was very revealing. Maybe the Gamecocks can make a run this year.--The ACC & SEC Blog

Gamecocks were the toast of the town on Thursday, though beating Ole Miss may very well not be that much of an accomplishment.--Over the Pylon

Way to erase that "Collapses when expectations are high" stereotype, Nutt. Kept the final score close, but otherwise that was about as bad as the Rebels could've looked on the national stage.--Hey Jenny Slater

We all knew we were overrating the Rebs, but we all did it anyway. The fact that Ole Miss is the best team in the bottom half of the league ought to cause us all to reassess our claims that the Southeastern Conference is the toughest in the land. We may be the league that stinks the least from top to bottom, but that isn't the same thing.--Dawg Sports

Time Out. Sack.  Time out. substitution infraction.  Incomplete Pass. Turnover on Downs. Game Over.  How did I live through 10 years of this?--Hog Database

You can add ‘didn't use Montario Hardesty nearly enough, obviously' to the list of Dave Clawson's many, many crimes.--War Blog Eagle

I suppose the letdown after the biggest moral victory in the program's history was inevitable.--Get the Picture

Ohio probably should have lost to North Texas.  Just pointing that out.--And The Valley Shook

They really should have beaten LSU. This team might have a future under Dan Mullen, although it might take a while to get there.--Garnet And Black Attack

When was the last time MSU football was exciting to watch?  Much less for MSU fans?--Rocky Top Talk

We liked it better when people were picking the Hogs to be a surprise team -- as in surprisingly good, not surprisingly weak.--Arkansas Expats

Yeah, might want to find some defense soon. That high-flying offense can't win all your games. What do you think this is, the PAC-10?--For Whom The Cowbell Tolls

Turned in a truly pathetic performance against the Gators. I know we all expected a Florida win, but the ‘Cats literally laid down and let the Gators walk all over them.--Garnet And Black Attack

The Wildcats are now best known for taking out Tim Tebow.--For Whom The Cowbell Tolls

Even they are asking -- when does basketball start?--Leftover Hot Dog

Hey, it's a road win. Hey, Vandy's still at .500. Those things still matter, I think, up in Nashville.--War Blog Eagle

If there is one thing about this week's power poll, it's that -- even with the complete unpredictability of this football season -- all is right with the world.  Vanderbilt is once again bad.--Red Cup Rebellion

Our nerds are better than your nerds, Conference USA!--Georgia Sports Blog