You know where to find Year2's ballot. My ballot -- and defense of resume voting -- is below. I do feel like I'm at least a bit off on some of these things, so like Year2 I welcome your constructive criticism.

Ties broken: There were just two this time around, LSU-Iowa (I went with Year2's placing of the Bayou Bengals above the Hawkeyes) and Ole Miss over Georgia Tech (also Year2's, and pro-SEC homerism won out).

First off, the particulars you've come to expect about my ballot. This is the last time the power-ish portion of the blalot will appear. From here on, I'll be going completely by resume. Below, the resume portion of the ballot counts twice. 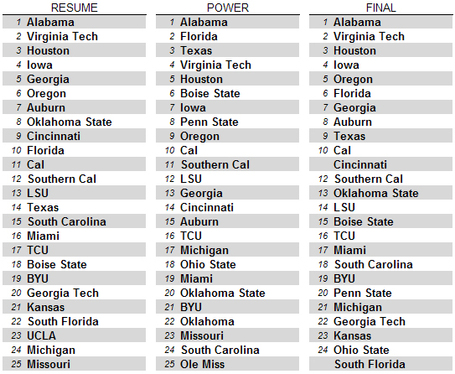 I did want to respond to what I think was a fair point Year2 made while unveiling his ballot.

I just don't have the time to parse through all 120 teams' merits, so I'm not going to pretend like I can and produce a resume ballot that makes perfect sense.

So I'll give you a bit of an idea about how I put together the resume portion of the ballot. Beginning with the second week, I started putting the teams I thought warranted consideration in the resume portion of the ballot into a spreadsheet with their results. Each week, I add teams I think deserve to be added but don't drop any team. (I was still keeping up with UCLA back at the end of the season last year, to tell you how ridiculous this can get.) Pretty much, if you're a 3-1 BCS team with any kind of impressive win to your name, you're in the spreadsheet at this point. (That's not universal, but it is pretty close.) There are several midmajors on there as well. I've got 37 teams in the spreadsheet at this point, and I'll probably have somewhere in the neighborhood of 50 by the time the season is done. I don't have to concern myself with an 0-4 MAC team or a 1-3 SEC team right now because I know that it's not going to merit consideration.

Teams that have done nothing get the ax first, regardless of their name or pedigree. Penn State was gone before the resume ballot even got complicated because defeating two so-so midmajors and Syracuse and then getting defeated at home by the first decent team you've faced doesn't deserve being on the ballot right now. Does that mean I don't think Penn State is a Top 25 team? Of course not. They're on the overall ballot and I fully expect them to move back onto the resume ballot. Right now, they simply haven't compiled one of the best 25 resumes in the country.

A final thing about this: It means that the final rankings are not who I think is the x-best team in the country. So, no, I don't think Iowa is the fourth-best team in the country. I think they're probably somewhere around No. 7, where I have them in the power-ish poll. That's inconsequential, though. They've played the fourth-best resume in the nation to my eyes, so that puts them higher on the final ballot. That means that, all other things being equal, they would be No. 4 next week again when we go to all resume. But all things aren't equal in resume balloting; each week provides another data point and causes teams to move because their schedules and results either get stronger or weaker. If your team wins its games as it should, it will move up a resume ballot. If it doesn't win or does so in an unimpressive manner, it will move back down.

Now, for the Top 25 that the resume process and the power poll created.

Ugh. I don't like Oregon up here at No. 5, so I'm very persuadable on that point. They've had some nice wins, though, so I understand why I moved them up this high. More than anything, this the result of a 39-point waxing of Cal, which I obviously still think is a pretty decent football team. I think Alabama is unquestionably the best team in the country right now. Virginia Tech gets a lot of mileage out of destroying Miami, Houston has a great schedule, and Iowa? Yeah, Iowa. The Hawkeyes not only defeated Penn State on the road, they defeated Arizona and an Iowa State team that's better than you think. This early in the season, with so many other teams eating cupcakes at a prodigious rate, that's enough.

This area has plenty of teams that are ranked too high and too low, but that's part of the problem with resume balloting early in the season. Florida looked impressive against Kentucky, unimpressive against Tennessee and took care of their cupcakes. That's why their resume is so bad right now and why they're No. 6 overall. That probably means they're going to fall next week, but the thing about resume ballot is that it's about the final ballot of the year, not the Week 4 and Week 5 votes. If Florida is as good as I think it is, the wins on their resume will move them up to where they should be at the end of the year. Georgia's win against South Carolina looks better, it's win against Arkansas looks worse than it did, but the Dawgs get credit for having played four BCS teams at this point and defeated three of them. Texas has destroyed a lot of very bad teams and has one really good win to its name against Texas Tech. I expect them to move up quickly once they start playing Big XII competition. I'm surprised Cal didn't fall further after Oregon annihilated them, but they stay in the Top 10. Cincinnati is better in terms of resume than I think they are based on my expectations.

Southern Cal still hasn't done anything other than defeating Ohio State that makes me sit up and go, "That's a Top 10 team." Oklahoma State has defeated Georgia and lost to Houston and eaten cupcakes. LSU is 4-0, but there's something about them that just doesn't instill much confidece right now. Boise State's resume is really hurting them at this point, and we'll see if they can even that out by putting up some big numbers in WAC play.

I'm starting to come around on TCU as a potential BCS-buster, even though I like Houston better for now. Miami is probably not as bad as we think they are this week nor as good as we thought they were last week. Ooh. South Carolina. Their resume will take a hit next week with South Carolina State even as the resume becomes all that matters, which should even out their high resume ranking with their low power poll position. BYU could go either way next week depending on the changing resumes. I fully expect Penn State to easily move back into the Top 15 or even the Top 10, but they have to earn it first.

Michigan looks like it's coming back to Earth a little bit, though I still think the Wolverines are going to have a good year. Georgia Tech is the latest ACC team to appear for at least a week, maybe longer, after its win against a North Carolina team that might be good. Kansas is finally starting to get me to pay a little attention to them. Ohio State has done nothing to impress me whatsoever, and might be gone next week at this rate. South Florida's big win against Florida State is offset by an otherwise awful schedule so far.