Share All sharing options for: An Ugly Drive Chart 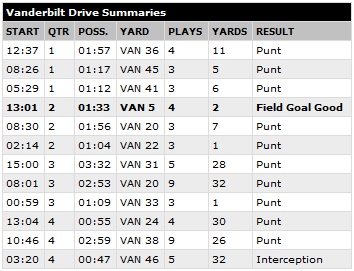 Vanderbilt had 157 total yards against Mississippi State, and only two of them were put to use for scoring. That's right, only 1.27% of Vanderbilt's yards were on a scoring drive. This two yard "drive," by the way, actually started at the Mississippi State five yard line, not Vandy's as the chart says, after a fumble by the Bulldogs' Robert Elliott.

I honestly can't think of a more discouraging drive chart. There could be some more turnovers I suppose, but then you could at least point at some mistakes you can correct. In the Commodores' case, they didn't make the big mistake. They simply couldn't move the ball much and the one score they had was a gift.

The new look, hurry up spread offense in Nashville is clearly still a work in progress. It did gain more yards than last year's did against Mississippi State, but not topping last year's 107 yard output would have been pretty hard to do. Larry Smith's 3.9 yards per pass were noticeably higher than the 3.1 that Chris Nickson and Mackenzi Adams put together, but the ground game declined from 1.7 yards per carry to 1.1 a carry.

Mississippi State can feel somewhat good about its performance, as the Bulldogs improved in every way offensively except turnovers (which increased from zero to one) from last year. The passing game was still spotty at best, but they did rush for a respectable 4.6 yards per carry.

No matter how you slice it though, this was an ugly game between these two teams. You'd be forgiven if you saw the 15-3 final and assumed that all the points were on field goals (MSU had a touchdown with a failed conversion). That drive chart for Vanderbilt still just sticks with me for some reason. I won't say that Vandy can't overcome this and make a bowl, because the Commodores lost to Mississippi State a year ago, but at 1-2 with the entire SEC East plus Ole Miss to go, it's not looking good for a repeat.