Combined BlogPoll Ballot, Week 3: It's Still All My Fault

Share All sharing options for: Combined BlogPoll Ballot, Week 3: It's Still All My Fault

Year2 will be along later today with a ballot that actually makes sense. My ballot is below the jump -- and yes, it's my fault that Alabama is ahead of Florida. A little bit less than a year ago, I was having a running debate with Alabama fans about why Florida should have been ranked higher than the Tide, so I guess I'm just a contrarian.

Ties broken: Ole Miss ahead of Virginia Tech, which is Year2's way; Southern Cal ahead of Houston, also Year2's way; Florida State ahead of North Carolina, Year 2's way; UCLA getting the last spot ahead of Texas Tech, my way.

Now my somewhat weird ballot, which I actually really like this week. Again, resume and power-ish poll count equally as we move toward pure resume. Next week, the resume ballot counts twice. 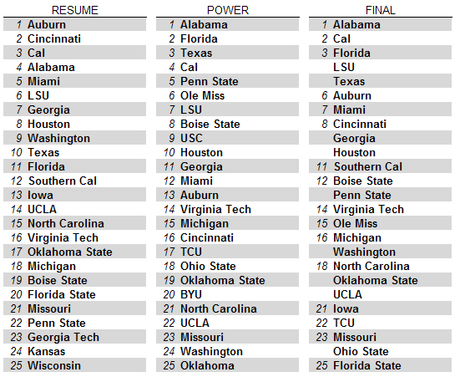 Well. Cal ahead of Florida seems like a stretch even to me, but there it is. It's entirely a resume issue. California has taken on and handled two BCS-league teams, including what appears to be an improved Minnesota. Even if they're relatively weak BCS teams, I'm going to give a school credit for that. The Golden Bears annihilated Maryland as they should have and put down the Golden Gophers' attempt at an upset. The only answers Florida has to that is not annihilating Tennessee as they should have and pulling away from Troy after generally looking unimpressive. If Florida starts defeating other teams like the GREATEST TEAM IN THE HISTORY OF COLLEGE FOOTBALL AND MAYBE ALL OF SPORTS!!!!!!!!!!!, then I'll be willing to move them back up the resume ballot. Alabama defeated a heck of a lot better team by the same margin as Florida in what still ranks as one of the wins of the year, and the Tide looks to have a great quarterback for the first time since ... well, maybe ever. LSU hasn't looked particularly good, but they get credit again for a strong slate. Texas took care of Texas Tech and moves up.

Auburn has taken on three FBS team and defeated all three by impressive margins. No, I don't feel at all like I have to explain saying they have the best resume in the country right now. Miami's win over Florida State looks a lot better now and they have a victory over Georgia Tech to put in there. Cincinnati has two road wins over BCS teams, Georgia appears to have rebounded from its Oklahoma State loss far better than Oklahoma State has and Houston takes over the mantle of non-BCS team that actually could make a run at the title game. (If undefeated, they would have wins at Oklahoma State, vs. Texas Tech and at Mississippi State to go with conference games against Southern Miss and at Tulsa. Show me a Big East team with a better schedule.)

Southern Cal still has a win over a pretty good Ohio State team, and the resumes get much thinner in this part of the ballot. Boise State's biggest win is at Oregon, and I still think the Ducks are just not that good this year. (I wasn't sold on Utah, either, so that doesn't help them.) Penn State finishes up conference play this wee-- Oh. They're not a member of the MAC? My apologies. Virginia Tech's win over Nebraska was nice. Ole Miss still has to prove something this week against South Carolina before they start to even out the resume with the power poll.

It's a mess here, largely because we have teams with mixed resumes and power results. Michigan's resume has started to look a little bit less impressive with Notre Dame as the only real trophy, which should be remedied soon enough. Washington has a very good win against Southern Cal and one of the better losses among the once-defeated teams. North Carolina started looking impressive in the last part of the ECU game, Oklahoma State defeated Rice and what got into UCLA?

Iowa continues to put distance between itself and the near-upset against Northern Iowa. TCU is all reputation at this point. That's okay, because Missouri is all resume. And Ohio State has no resume. Their marquee win is, what, shutting out Toledo? Florida State would be a lot higher if they hadn't struggled with Jacksonville State.