How Bad Was Alabama's Struggle with FIU?

Share All sharing options for: How Bad Was Alabama's Struggle with FIU?

After looking into things closely, I think I know why that feeling is going around. I also would disagree with it myself, but your mileage may vary.

Last year at this time the question was, "Is Alabama for real?" This year, Bama was a preseason top five team. They were not supposed to ever look bad for a half against a Sun Belt team if you're preseason top five.

Another thing kicking in is FIU's reputation. Tulane went 2-10 last year. FIU, believe it or not, was a game away from bowl eligibility at 5-7. The Golden Panthers still got blown out by teams like Kansas and Iowa, but they were competitive within the conference and are no longer an instant 50 point win for any Big Six conference team. They've always been feisty even when they were horrendous, and the program is moving in the right direction under Mario Cristobal, but most folks assume they're still in danger of going winless year in and year out. 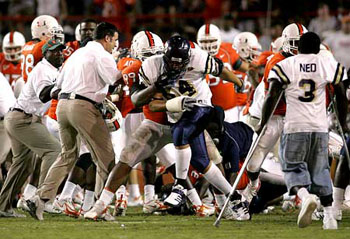 FIU: always been feisty, even when horrendous.

Alabama has had some trouble with kickoff coverage. Did you know they allowed a return for a touchdown against FIU? Horrible! Well, that's what the instant, gut reaction would say anyway.

Also, FIU jumped out at the beginning and scored some early points. Sure, they were doing something entirely different from what they did in the past, surprising the Tide defense, but hey, why not break out the torches and pitchforks? They've been getting awfully lonely since they were last used in January.

A Look at What Happened Overall

I'm going to break out the charts I used last week for year-over-year comparisons. As with then, sacks are removed from the rushing totals.

Alabama wasn't just better against FIU than it was against Tulane, it was much better in every way. I mean, look at what happened with John Parker Wilson last year. He threw for a pitiful 73 yards on 3.2 yards per pass and, despite playing behind the vaunted Tide line, was sacked four times. Take sacks out of total yards again Alabama is firmly under 200 total yards.

Against FIU, Alabama had its way. Greg McElroy got sacked just once and averaged a first down per pass. The rushing game stepped things up by more than a yard per carry. For whatever complaints you can have about the game, this is what powerhouses do in cupcake games. They run up huge totals across the board.

The pass defense is clearly the concern here, as the yards per pass increased even as the total passing yards decreased. But again, FIU did new things that caught Bama off guard. Any defense can look bad for a couple drives if it has prepared for something different than what the offense is showing. But, the Alabama defense did adjust. It allowed 95 yards in FIU's first two drives, 85 yards in the depths of garbage time, and 24 in between. That's how you fix what's wrong.

The rushing defense also was a lot better. Any time you can hold a opponent under a sack-adjusted threshold of two yards a carry, you had a great day. Also note the sack total that went way up.

So what does this all mean?

As for the surprisingly lively North Texas (beat Ball State, lost by one in OT to Ohio) this week? Well, last year Alabama came back from the Tulane debacle and whipped Western Kentucky 41-7. A similar score versus the Mean Green would not surprise me one bit.