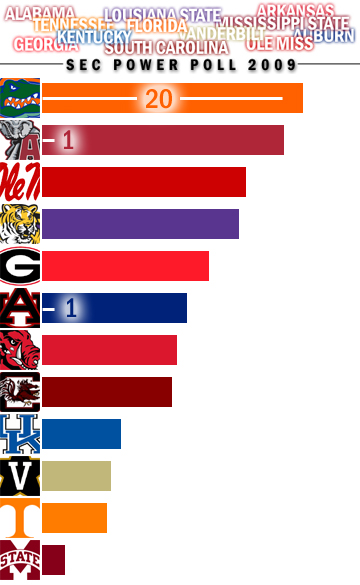 No, that's not a typo. Auburn got a first-place vote. At least no one can accuse our voters of mindlessly following conventional wisdom.

The rest? Well, they'll explain all that after the jump.

What's the over/under this week?  Not on the points -- on Crompton's turnovers.--Get the Picture

I cannot tell you how excited I am for Saturday. The game will be an epic beatdown or a nail biter. There is no in between.--Alligator Army

If you saw any of Bama's midseason games from 2008, you saw that post-Virginia Tech sleepwalk coming from a mile away.--Hey Jenny Slater

A little bit of a hangover, which was to be expected.  I still think they are the class of the West.--And The Valley Shook

Can we pretty much guarantee Alabama isn't going to cover the week after a big, non-conference win?--The ACC & SEC Blog

The Carolina game in two weeks is a big one for the Rebels.--Garnet And Black Attack

This is still based purely on preseason speculation, since Ole Miss had an open date, which also is called a bye week. I did not, however, use the term "idle," because, for all I know, Jevan Snead got some laundry done and completed a term paper. I'm not going to accuse the Rebs of sloth just because they didn't play a game.--Dawg Sports

The Rebels had the week off after their win over Memphis. That should be enough time for them to all get over the flu, right? Looks like they will cruise through the first half of their season.--For Whom The Cowbell Tolls

The Tigers seem to be trying to figure it all out.  I continue to think they have talent and good coaching, but they look like a team groping around in the dark.--Georgia Sports Blog

I'm beginning to think Les Miles cannot develop talent.  This Tigers team looks much softer on the field than on paper.--Orange and Blue Hue

As home openers go, there's worse things than shrugging off Vandy. But the days of thrashing the likes of Virginia Tech seem further behind Miles than ever, don't they?--War Blog Eagle

After what I've seen in the first two games, nothing this team could do this week would surprise me.--Get the Picture

The Bulldogs were far from impressive in the win over South Carolina. As if we needed any other reasons to doubt them after their OK St. performance.--Over the Pylon

Two weeks in without much competition, but even I have to admit that Auburn is piling up the yards and points and looking far better than expected.--Roll Bama Roll

If Gus Mahlzan can continue to get offensive production from that hodge podge of players . . . he might be the greatest offensive mind in all of football.--Orange and Blue Hue

Defeating Miss State is no accomplishment. Beat West Virginia and we can talk.--Alligator Army

Hog fans should get ready for this brutal onslaught on the horizon.--Ghost of Chucky

Hogs come off the most unnecessary bye week ever to face 11 straight games. The matchup with Georgia will set the tone for the rest of the season.--Arkansas Expats

Petrino says he spent most of the preseason preparing for Georgia (why can't every coach just tell the truth about openers vs FCS teams?); we'll find out on Saturday.--The ACC & SEC Blog

Spurrier proves he may finally be turning things around in Carolina.--Track Em Tigers

They found an offense on the weekend the defense decided to take off. They will be a pain in everyone's side all season.--And The Valley Shook

'Cocks probably shouldn't go in front of Georgia. But if that game's on a neutral field, Carolina wins by 10, and the 'Cocks weren't the ones losing their Week 1 non-conference road game, were they?--War Blog Eagle

Well, at least they aren't State.--And The Valley Shook

If Vanderbilt wants to go bowling, this week's game against Mississippi State is a must win. 2 games in, with 10 more in 10 weeks, this team is already hobbled by injury.--Vanderbilt Sports Line

Oops, maybe that Vandy offensive juggernaut is missing a little something yet.  Like WRs who can hold on to the ball ... --Save the Shield

Vandy was simply inferior to LSU, but they were not embarrassed.--A Sea of Blue

Oh, there you are, Jonathan Crompton! I was wondering where you'd gotten off to! Still not quite up to speed on that tricky center exchange, I see?--Hey Jenny Slater

I thought about placing them lower, but decided to save some room for this week's results.--Get the Picture

The Lane Kiffin Power System can make you, too, into an SEC-quality QB.  (Disclaimer: Offer not valid versus non-WKU opponents.)--Save the Shield

Mullen may have the right attitude, but what he doesn't have is playmakers, on either side of the ball. Any SEC wins they get this year will be big upsets.--Hey Jenny Slater

They will win at least two SEC games this season. Dan Mullen is too good to have an epic crapfest of a season.--Alligator Army

Is Sly Croom available for a Defensive Coordinator gig? You can't have everything in Starkville.--The ACC & SEC Blog