As usual, my ballot after the jump is probably the first place you want to look for anything you find bizarre. Year2's ballot is here. We are both open to input, so the comments sections are for your comments/criticisms/question of either voter's sanity. Ties I broke this week, twice in favor of Year2's more "normal" ballot: Ole Miss/LSU, Oklahoma/Michigan and Missouri/Texas Tech. Let us know what  you think by Tuesday evening or Wednesday morning and we can adjust accordingly.

To my ballot. The first thing I wanted to do this week was present you with a better view of how I blended the resume poll, which counts once, and the power-ish poll, which counts twice. (Next week, both will count just once.) I only moved one team this week: Florida, which is still No. 1 in my book. The rankings of the other teams as they would have been had I not moved the Gators is in parentheses. 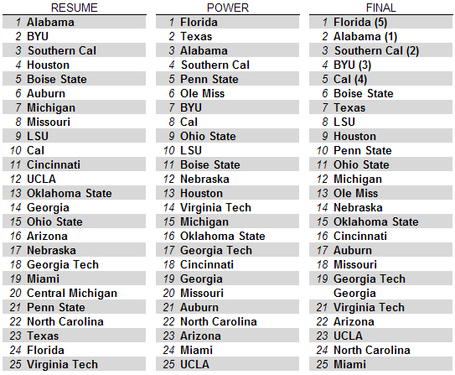 Florida is No. 1 because -- well, they are. This is the one thing I chose to correct in this ballot, even though I'll admit there are some more bizarre entries (No. 7 Texas?) that should clear themselves up shortly. Alabama has one good win over a good team and one blowout of a cupcake, but one that is at least an FBS cupcake. Technically. Southern Cal has one of the more "impressive" wins of the season, even if it is over Ohio State. I know the argument against them -- the "better team" actually lost -- but it's still a win over a Top 25 team. BYU should need no explanation. Cal benefits from being a little bit higher on the power ballot than those above them on the resume ballot and vice versa.

This largely makes sense to me except for Texas at No. 7. Which I suppose is a pretty big "except for." But it will change over time if nothing else, as the Longhorns take on more difficult competition and teams higher on the ballot take on less talented opponents. Unless, of course, Texas loses. I'm a bit nervous about LSU ranking this high after just defeating Washington and Vanderbilt, but that's still a tougher slate than a lot of teams have taken on to this point. Houston gets a nice boost from its win over Oklahoma State. Penn State has clobbered a couple of FBS also-rans, but at least they're FBS also-rans.

Ohio State doesn't fall too far for losing to Southern Cal. Michigan might be a bit too high for my power sense, but they've got a borderline impressive win in Notre Dame. Ole Miss needs to play someone other than Memphis to keep the resume poll from dragging them out of the Top 10. Nebraska looks like the best team in the Big XII North, for whatever that might be worth. Oklahoma State gets credit for defeating a Georgia team that looks better now than it did a week ago, which offsets to some degree the loss to Houston.

Missouri probably gets too much credit in the resume poll, but a lot of teams have played FCS outfits at least once and are being penalized for it. Cincinnati is looking like an impressive contestant in the Big East, which means a midlevel team in any other league, so they're ranked like it. Georgia Tech got lucky in its win over Clemson on Thursday. Georgia burnished its credentials with a win against a better-looking South Carolina and gets back on the ballot because it now has a win.

Virginia Tech has one win over Marshall. So if you think this is a bit low, my response is that it's actually probably too generous. Arizona defeated Central Michigan, who defeated Michigan State. Hey, they aren't a lot of attractive teams out there if you're not sold on Utah or TCU, which I'm not yet. UCLA? Sure. North Carolina is lucky to stay on here after it took a safety to defeat Connecticut. Miami's win against Florida State looks a lot less impressive now.