It's Good to be Home

Share All sharing options for: It's Good to be Home

I'm with Dorothy: there really is no place like home.

I have arrived back in the States from my honeymoon abroad, and my wife Danielle and I had a great trip. About the only thing worth complaining about it was the poor selection of sports coverage on international CNN, which consists mainly of soccer, Formula 1, and cricket. Hey, did you hear that Michael Schumacher is going to drive again for Ferrari? I did, about 50 TIMES.

Our trip began in Venice, which is basically the European Disney: hot, crowded, and very touristy. I will say this about Italy though: the food is fantastic. I may never be able to eat at the Olive Garden again. Afterward, we made our way from Vienna to Salzburg to Innsbruck to Munich before leaving our Euros behind and returning to the land of the greenback. In Salzburg, I had a particular dish called Berner Würstel. I had no idea what it was because the menu was in German, but wurst means sausage and that's fine right? I got this: 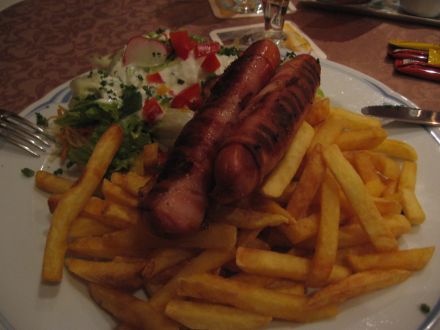 It's cheese-filled sausage wrapped in bacon. It's a heart attack on a plate and better than I have the linguistic ability to describe.

While away, I had really only four incidents that were football-related in the least:

Europe was fun, and if you're ever looking for a way to make the doldrums of the off season go faster, you could certainly do worse than international travel. That said, I'm glad to be back home in the US where restaurants serve free tap water without first trying to serve you overpriced bottled stuff, public restrooms don't cost money, and Coca-Cola products don't cost an arm and a leg.

Posting for me will be a bit light this week as I work off the jet lag, get back into the swing of things at work, and as Danielle and I get all of our wedding gifts sorted out. I should be back full time next week as the season now is just about a month away.

It's great to be home again with my beautiful wife after a wonderful vacation, and here's to the next month getting out of the way of the upcoming season quickly.