At the beginning of April, I moved from a one bedroom apartment to a two bedroom apartment in anticipation of my then-fiancée Danielle finishing grad school in Ohio and moving down to Charlotte (which would happen in June). She said the place had to have some things, such as "a feel of something other than a bachelor pad" and "a dining room table."

The weekend of the move, I used the truck to pick up a table that I then spent a bit of the afternoon putting together. I had been up early in the morning and I was tired from lugging stuff around much of the day, and the end result was this: 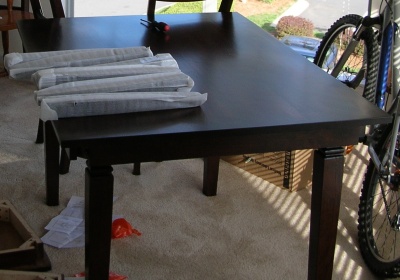 Yes, I put the legs on the inside of the table structure instead of the outside where they belong. I was wondering why it was so difficult to attach the legs, but I soldiered on and ended up having to redo the entire thing.

Why do I bring this up at the beginning of a picks piece? Because I’m going to say or pick something at some point that will probably upset you. Before you get on my case about it, just know I am fully capable of idiocy. The table is offered as proof of that. Also know, though, that I am capable of putting out a better preseason top 25 than all the experts did, as in 2007.

With that out of the way, on to the picks.

I see the East Division being the Gators' domain without another real serious contender. For much of the off season, I was thinking Georgia and South Carolina would end up tied at 5-3, but I changed that pick recently. I'm torn on Georgia; I don't think they'll go 7-5 as some said in January, but I don't see a regular season record improvement either as some say now.

As for the Gamecocks, it just feels like it's time for Steve Spurrier to make another run at something (in this case, second place in the division). That's about as flimsy as analysis comes, but sometimes you just have to go with your gut. Tennessee will be improved but not greatly so, Vandy will just miss out on another bowl, and I have a hard time seeing Kentucky do a whole lot.

I realize I'm risking a jinx, but I'm picking the Gators to run the regular season table. That's happened before at UF, unlike a full perfect season, and relatively recently at that (1995). Urban Meyer has done it before himself, in 2004 with Utah, and just about everything has broken the Gators' way this off season.

I feel almost charitable to UGA for picking a near-repeat of last year's 9-3 (6-2) mark. What the team has lost outweighs what it gains in my opinion. The schedule is as rough as anyone's, and worse than 8-4 could easily happen (see current win prediction against Georgia Tech). I'm only going with this record out of respect for Mark Richt. In doing so, I'm almost going against a warning sign from Pythagorean wins.

The margin for error is very slim with this team. If Stephen Garcia goes down, the season is basically shot. It's a risky proposition going with the Gamecocks at third in the East, but you generally have to break with the consensus somewhere if you're going to be right. If I'm going down, I'm going down with Spurrier. Let's just move on.

When you think about it, Jonathan Crompton is a bit like Windows Vista. At the launch of both, they were plagued with driver incompatibility and a lack of stability. Think of Lane Kiffin's offense as Service Pack 1, in that it will fix a lot of those launch issues. Even so, the brands of both Vista and Crompton are probably damaged beyond repair, which is why Windows 7 is being launched ahead of schedule and JC will have a very short leash with the fans.

Having gone to and won a bowl now, Bobby Johnson is playing with house money in Nashville. I like what Vandy has coming back on defense, but I'm not fully sold on the offense. From a points scored/points allowed standpoint, Vanderbilt was right on target last season with its 7-6 record. It was how the Commodores got there that was fishy, what with terrible offensive production and them being outgained by opponents by a wide margin. Spring one upset, though, without getting upset themselves, and they'll be back bowling.

Kentucky just wasn't very good last season, and they made it to bowl season largely on the back of a terrible non-conference schedule. The terrible non-conference schedule is back, but I just don't see improvement from the Wildcats that many of the other conference teams will make. Going with Mike Hartline under center over Randall Cobb didn't inspire confidence, and losing Jeremy Jarmon was the last straw.

I've gone back and forth on this all off season, at some point having each of the three main contenders in first place. Ultimately, I went with what I judge to be the best defense and best coaching staff. You'll note though that I kind of did a cop out by having Ole Miss and LSU tie for second (with the Tigers taking the tiebreaker), but I really think right now that these teams are that close.

As I said, I had 'Bama winning the division for much of the off season. It was based solely on the Tide having the best defense in the division, and ultimately that became the tiebreaker. Defense does win championships after all, so my SEC West predictions are going to sink or swim based on that.

You can point to John Chavis as the reason why I have LSU here. The offense will be good, but it wasn't terrible last year (save all the pick sixes). Should the defense play up to its potential, this will be a very, very good team. The schedule is perhaps the toughest of the top three teams here, though. I don't see the Tigers sweeping its back-to-back series with Georgia and Florida, and I don't see them sweeping road games at Alabama and Ole Miss.

A lot of people seem to be doubting the Rebels due to being coached by Houston Nutt. Not only is his underachiever label mathematically dubious, but he's guided teams to the SEC title game before. In one case, 2002, he even went over a Nick Saban-coached LSU team, so the presence of Saban in the division isn't a disqualifier for Nutt either. If Ole Miss fails to win the division, it won't solely be due to the head coach.

If Bobby Petrino stays in Fayetteville for a while, which I think he will do, he'll go to several SEC title games. I'd say it's a good bet he'll even win Arkansas its first SEC title. Neither of those things will happen this year, but significant progress will be made. The offense will be fine; this team will go as far as its defense will let it.

Auburn is kind of in the same state as Tennessee is in, with a new coach trying to erase memories of a bad offensive coordinator hire from last year. Each had good defenses last year too, which makes the offensive calamities even more of a shame. I don't think both can make a significant improvement though, and Tennessee has more horses on its roster than Auburn does. I like Gus Malzahn, but I'm not so high on Gene Chizik.

Bear with my nerdiness for a sec, but consider this bit of music from the band Estradasphere. It took the basic old 8-bit main theme from Super Mario Bros. 2 and made it into a credible sounding jazz band song. Dan Mullen's task in Starkville is basically to do the same thing: take the old, lo-fi Sly Croom offense and modernize it into something worth watching. I like Mullen and think he'll do a good job, but I saw how hard the transition to the spread was for Mullen and Meyer in Gainesville. If it wasn't for good talent, the team would have fallen far short of its eventual nine wins. With no talent to speak of and some serious growing pains ahead, it will be a success if Mullen can win a conference game this year.

The order of the standings is more important to me than the picks of the individual games are. The game predictions are a snapshot of what makes sense to me know, and they don't include many upsets. Upsets, after all, don't make sense by definition. Make no mistake: these won't be 100% right.

It wasn't until after I was done that I realized that I only have seven teams going to bowls. I think eight is probably more likely, and filling out all nine contracted bowl spots isn't out of the realm of possibility. My projections mainly see a top heavy conference, and I feel that's pretty accurate.

We'll see how it goes once the season gets started, but this is what I've got right now.