For a lot of my life, I resisted it. I didn't want to believe it. I grew up on Steve Spurrier football (the Florida kind) and loved offense. When I saw my Gators go down in flames in the 1995 national championship game, it was a fearsome offense that largely did the stomping. Offenses are the ones that score the points, and you win games by scoring more than the other team, right?

Well, as I got older and watched a lot more football, I began to go the other way. After all, teams that win championships always have great defenses. Great offenses are optional, but great defenses never seem to be.

For a while now, I've been turning over in my mind the possibilities of proving the point. Anecdotal evidence is nice, but something a little more concrete than "entropy favors defenses" would be preferable. Just for fun, I decided to run correlations of points per game scored and win percentage and then points per game allowed and win percentage. Surely, I thought, the defense would show a stronger correlation.

What I found surprised me. And don't call me Shirley. 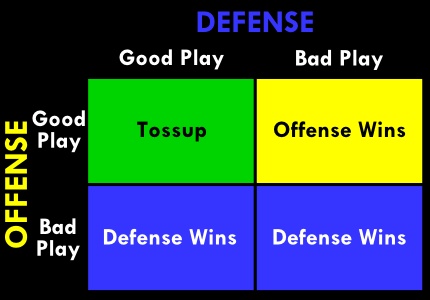 This chart though, would seem to suggest that it's more important to have a great offense than a great defense. After all, the defense can make a bad play and still succeed, whereas the offense cannot. The offense has to make a good play to succeed, so that must mean offense is more important, right?

That fact is actually the very reason why defense wins championships. It is much easier for a defense to force an offense into a bad play than the other way around. An offense can force the defense to make a bad play with fakes, good passing route design, and guys that can make people miss. However, most teams don't use fakes other than play action regularly, employ fairly standard routes, and have at most one player who can make guys miss.

A defense can force bad plays by jamming receivers, blitzing, and generally getting into the backfield often. Those are things defenses (and especially the best ones) can and will do on almost every play. Offense is the more delicate of the two operations, after all, so it can be disrupted relatively easily with these methods. It's no accident that all of the greatest defenses are the most disruptive ones. If you force the offense into making a bad play, there's no way it can succeed. If you can force the offense into a bad play more often than whoever you're playing, you're more likely to win.

If anyone would like to make the case for the opposite, I'm all ears. Part of me still wants to believe than offense wins championships, and I'm always up for being proven wrong. However, I think we're stuck with the cliché about defenses winning titles because it's simply true.