As a counterpoint to Wednesday's analysis of Florida's running game in 2008 and 2009, I decided to apply the same thing to Alabama's running game. Florida's reputation is that of a big play team, which the numbers showed, but Alabama was billed more as a power-oriented, grind it out kind of team. Just how true is that for the Tide?

Well, Alabama's two primary backs were the now-departed Glen Coffee and current sophomore Mark Ingram. The third option was the injury plagued Roy Upchurch, who is now a senior and figures to be an important part of the running game when healthy. Those three got by far the lion's share of meaningful carries, so I kept the analysis to just them. When you see "team," that refers to the three of them combined and nothing else. Also, the game against Western Kentucky was ignored since WKU was not yet a full I-A member last season.

Here's the quick reference chart for 'Bama in 2008:

Not surprisingly, Coffee's numbers closely mirror those of the "team" in this table. He had more than half of the total carries that I analyzed, so it would make sense that his are the most powerful influence on the team totals. What sticks out to me was the fact that a shade under 90% of his carries were for positive yardage. It's a testament to his hard running and the offensive line that he ran behind last season. The highest such percentage for Florida was Percy Harvin with 87.9% of carries being gains, and no other primary rusher cracked 85%.

Ingram was a step below Coffee though. His median carry is lower than that of Coffee (and Upchurch, for that matter), his gain percentage was lowest, and his YPC was lower with or without big plays factored in. Ingram was no slouch of course, and he was just a freshman. What should be encouraging to Tide fans is that he was not too terribly far from Coffee in most everything, so with a natural improvement that comes from age and experience, Ingram should be up to Coffee's production level soon (assuming the offensive line can open him some good holes).

Upchurch is the more interesting guy to me as the one doing this analysis because his run total was far below the other two. That means he has the potential to deviate furthest from the "team" total, and he did not disappoint. Upchurch's single rush for more than 30 yards (a 62 yard run against Arkansas) bumped his YPC upward nearly a yard and a quarter. Even with that outlier taken out, he still had a much higher YPC that was 0.03 away from being a full yard more than Ingram's. Upchurch's gain percentage was also ever so slightly above Coffee's mark. 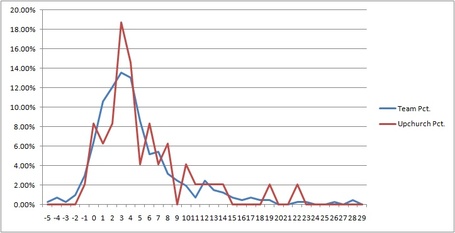 While Coffee's and Ingram's distributions follow the blue team line almost exactly, Upchurch's doesn't in some key ways. He has a much higher percentage of runs in the 3-4 yard range than were in the 0-2 yard range for the other two, and he also had a higher percentage of carries in the 6-15 yard range as well. That's why Upchurch's average came out so much higher -- it wasn't a case of breaking long runs consistently, but rather that he went for intermediate gains more often. Some part of that, I would image, has to do with him getting a disproportionately higher number of garbage time carries.

One last thing before moving on. I find the long gain percentage interesting because of something I saw in the Advanced NFL Stats post that inspired me to do all of this. The percentages for Coffee and Ingram were right at about 2.2%, and Upchurch wasn't that far below. That is the percentage of rushes for big gains that Adrian Peterson has in the pros, and it was much higher than that of the entire NFL (0.91%), Jamal Lewis (0.88%), and Brian Westbrook (0.93%). Though Alabama was considered stodgy and old fashioned in its running style last year, the team broke off big plays at the same rate as an NFL sensation. Food for thought when comparing the college and pro game.

Finally, here's the table on effectiveness by down. I looked both at YPC on each down (capped at 30 to avoid too much skewing) and the percentage of the time that the player picked up a first down. If a player had fewer than five carries on a particular down, that was excluded.

This is really where the difference between the rushing style of Florida and Alabama comes out. None of Alabama's players picked up first downs on first down at a rate of above 20%, while all four main Gators, including the hulking Tim Tebow, surpassed that threshold (Chris Rainey even did it at a 30% rate). All three Bama backs have their best YPC on second down, while only Jeff Demps of Florida had second as his best down.

Coffee's third down percentage is not quite up to Tebow's (75%), but it's still very good. Ingram's coin flip of a percentage is a little disconcerting, especially since only three of his fourteen attempts were from longer than two yards (and he picked up one of them). The third down percentage is a bit misleading for Upchurch though. Of the six third downs he failed to convert, half were with eight or more yards to go. His YPC on that down is not misleading though since, aside from one 12 yard run, he didn't gain more than four yards on a third down run.

The numbers say what I think everyone would expect them to say. Florida's running game was more explosive than Alabama's was in 2008, but the Tide attack was more consistent on a down-to-down basis. In 2009 we can expect to see plenty of Ingram and Upchurch (when healthy), but the highly touted freshmen Trent Richardson and Eddie Lacy will probably play a role in the proceedings too. Needless to say, the pace at which 'Bama can rebuild its offensive line will go a long way in determining how well its run game will do in 2009.