The New Guys Get Ready for the Season: Gene Chizik

Share All sharing options for: The New Guys Get Ready for the Season: Gene Chizik

This year, the SEC has three new coaches who hail from a variety of experiences: one was a BCS coordinator, another was a BCS head coach and a third was an NFL head coach. This week, with help from fans of the coaches' former teams like Clone Chronicles' mplscyclone, we take a look at each of the three. 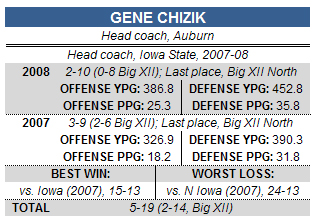 remember that at one point the most controversial hire after the 2008 season was not Lane Kiffin, but Gene Chizik. After all, what was Auburn doing hiring someone who couldn't win in the Big XII North to try to win the SEC West?

That question seems to linger still. When I talked to Jay at Track Em Tigers on Team Speed Kills Now during SEC Media Days, he suggested that there were still many Auburn fans who weren't entirely satisfied with Chizik. This wasn't just about the underwhelming results Chizik saw in Ames, but it's hard to doubt that had the new head coach come as the man who slayed Missouri or Texas or Oklahoma, he would have been warmly received on the Plains.

It was an odd fit anyway: A team that struggled on offense choosing a defense-minded coach whose defenses had performed poorly at his previous spot. (Poor defense being a relative thing in the Big XII -- but really, almost 453 yards a game in 2008?)

The choice was made more bizarre not just by Chizik's 5-19 record, but against whom those five wins came: Iowa, Kansas State and Colorado in 2007; and South Dakota State and Kent State in 2008. After those two wins to kick off the season, Chizik proceeded to lose 10 straight.

Not that everything about Chizik was bad, mplscyclone says.

He recruited better than people give credit for. If you just look at pure rankings, you see that the recruiting rankings were lower than previous Head Coach Dan McCarney. ISU did get more athletic at the skill position level, however. We have some speed and athleticism, particularly at WR and CB that we didn't have previously. There also was more emphasis on special teams. We signed a kicker to a scholarship for the first time in school history, and we had a great kick-return game. In the past we had walkons for kickers, and didn't really have anyone too explosive returning punts and kicks.

All of that was well and good. But the (well-deserved) bitterness over Chizik's departure after two disastrous years linger. More importantly for Auburn fans, there were also football issues.

He's a phony. During his tenure at ISU, he said all of the right things. He came across as a guy who really believed what he said. He was very reserved, and had this image of a calm, collected man. Now that we've seen his antics at Auburn, it brings up a couple of things. Either he is a calm, down to earth kind of guy that is just showboating because the SEC coaches tend to play up to that (in which case he is a phony) or he's really an enthused guy that just didn't want to be at ISU (in which that case he is a phony) During the season, a rumor floated that he was unhappy in Ames. He went on the say he was firmly entrenched in Ames, and could see himself here for the foreseeable future.

He was very much a rookie head coach. Unorganized at times. We'd see things like delays of games right after time outs. Against Iowa, we had situations where we got a delay of game, called timeout, then had a delay of game coming right out of that timeout. Very unorganized, and Chizik was outcoached many times. His selection of staff was questionable. He hired guys who were his buddies, but had opposing philosophies to Chizik about how to run the offense and defense.

As far as whether Iowa State was on the rebound when Chizik left, the record was mixed.

Many people saw the athleticism on the field at a level we were not used to seeing at ISU. I do think people believed we were closer to turning things around than our record indicated. Even though we only won 2 games, there were 5 losses that were winnable, including a few we probably should've won. The area where we were not turning it around was on the Offensive and Defensive Line. These were weak areas for ISU the 2 years that Chizik was there, and he didn't seem to be doing much in recruiting to try to turn that around. Obviously to win football games, you have to win battles at the line of scrimmage.

His exit was not well-received, but neither do the Cyclones' fans seem to be weeping over the loss.

People were basically in shock when Chizik left. People were down that he left before doing everything he was hired to do at Iowa State. I think people took it as him taking the easy way out, as coaching Iowa State is very challenging. Most ISU fans have moved on. Who wants a coach that doesn't want to be there?

I wonder, though, if the rebuilding job will be any easier at Auburn. There's little question that Chizik will have better talent to work with Auburn. But he will also be working to catch Alabama and LSU in his new division instead of Nebraska, Missouri and Colorado. Winning against teams from across the league will not be much tougher -- it makes little difference whether your conference championship foes are Florida, Georgia and Tennessee or Texas and Oklahoma. But the quality of the opponent in the league title game doesn't matter any more for an SEC West team that it does for a Big XII North team if you can't get there.

CONCLUSION
It's hard to get a read on Chizik. He was not as impressive as Dan Mullen at SEC Media Days, but he also wasn't a flop. That followed the pattern Chizik followed when he seemed to intentionally avoid the huge uproar that Kiffin produced at Tennessee to try to draw attention, though that give us few clues as to Chizik's actual temperament. Whatever that temperament, it didn't produce results at Iowa State. He probably won't get to 5-19 at Auburn if things start out the same there. He'll be gone long before the losses pile up that high.