The New Guys Get Ready for the Season: Dan Mullen

Share All sharing options for: The New Guys Get Ready for the Season: Dan Mullen

This year, the SEC has three new coaches who hail from a variety of experiences: one was a BCS coordinator, another was a BCS head coach and a third was an NFL head coach. This week, with help from fans of the coaches' former teams like Alligator Army's mlmintampa, we take a look at each of the three. 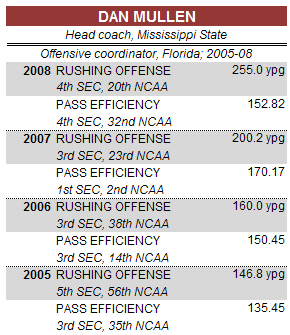 become a first-time head coach at the BCS level. Jumping from coordinator to head coach is more than a bump in title, salary and responsibility -- which makes the outcome of that promotion dicey. Sometimes, you hire Mark Richt and find the next great one. Other times, you hire Greg Robinson and ...

Mid-tier programs in leagues like the SEC, though, really have just three options: The relatively untested mid-major coach (who usually hold out for better jobs if they're that good), the retired coach or the upcoming coordinator. Mississippi State took the coordinator route and tapped Florida offensive coordinator Dan Mullen.

But mlmintampa argues -- as Year2 has in the past -- that the success Meyer and Mullen experienced at Florida has less to do with a predetermined offensive "system" than a flexible offense that works around the talent you have at your program.

Dan Mullen can be successful at Mississippi State if he follows the lead of Urban Meyer. I don't mean winning a National Championship in his second season. But Meyer tailored his offense and personality to his team and leaned on a dynamic defense to make up the difference. If Mullen can reformat the spread offense around the guys he has at Miss State, the Bulldogs can improve over time. He needs a defense first because the spread will take at least three years to work to its full potential.

More ominously for Mississippi State fans, mlmintampa suggests that the lack of credit given to Mullen for the explosive offense Florida ran over the last four years -- and particularly over the last couple of seasons -- could be well-deserved.

At Florida, Mullen never got much credit. This was partly due to the epic personalities surrounding him in Meyer, Tebow and the more successful coordinator, Charlie Strong. While Strong's defenses were outstanding in '06 and '08, no one ever said Mullen was such a great offensive coordinator. Why? Because his play calling was between suck and average. Most of the Florida fan base accepted this, since the team excelled. But look back at some of the big runs. They were simple counters and pitches, played to perfection by elite backs and an All-SEC line. Mullen will not have that at Mississippi State and may never have it. He will have to figure out other ways to win, which he never had to do in Gainesville.

The biggest question, though, remains the one that is almost impossible to answer about any coordinator: How successful will he be now that he takes over all aspects of the program, from managing personalities to recruiting to soothing boosters.

I don't know about Mullen's managerial skills since he has been under Meyer for so long. If he follows Meyer's style, it will work, and he will be involved in every part of the team. I assume he would be successful at Mississippi State, but 8-5 successful, not SEC Championship successful. He may not have the patience to coach 4-5 years before a bowl bid. After all, if Mississippi State gets good, who gets bad? I don't see the Bulldogs overtaking Bama, LSU or Ole Miss. I fear Mississippi State will chew up and spit out Mullen just like Sly Croom. But stranger things have happened.

Who gets bad? This is the problem that South Carolina, Kentucky and Vanderbilt have faced for the last several years in the SEC East. All have improved. But, with the exception of Tennessee's recent decline, none of the Big Three programs have been down long enough for one of the lower-tier programs to convincingly claim a spot near the top of the division, much less among the conference elite.

CONCLUSION
I have to admit that I was impressed by Mullen during SEC Media Days. Yes, he was very, very enthusiastic -- scarily so, considering the daunting task he had in front of him. But he also seemed confident, assured, like a man who has a very clear vision of where he wants to take his football team.

Looks can be deceiving, of course, but in Mullen's case, they're all we have to go on until the games begin in September. There's reason for hope in Starkville. Saying anything more would be getting a bit ahead of ourselves.