Share All sharing options for: Sprints Hearts the Sporting News // 08.18.09

Shameless self-promotion. Again, Team Speed Kills Now goes live at 9 p.m. ET / 8 p.m. CT. We'll have bloggers from Gobbler Country (Virginia Tech), Backing the Pack (N.C. State) and Mid-Major Madness (think about that one a minute) to talk about 2009 out-of-conference opponents for SEC teams. And we'll take any calls we might receive. 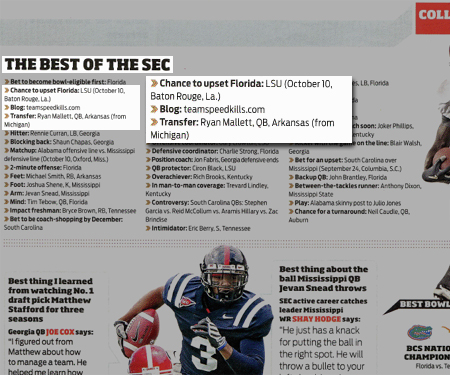 But you already knew that, didn't you, faithful reader?

Actually -- and in all sincerity -- some of those kudos belong to you, as a blog read and commented upon by no one wouldn't be a very good blog at all.

We can assure you this will not go to our heads. However, you should know that our new URL is www.teamspeedkillsbestestsecblogeverer.com.

Is Alabama doomed? Chris Low digs up a two-week-old Cecil Hurt column that I can't fault him for missing because I missed it too. But it raises an almost important point.

[A]s Hurt points out, nobody saw it happening in 1997 or 2000, either. The Tide were coming off an SEC championship in 1999, which remains the last one they've won.

Like Low, I'm not sure that past indicates future here. But it's interesting to think about in a sport where we tend to predict based on the previous year.

Red Cup Rebellion chips in another portent of doom.

We are talking of course, about Nick Saban's inability to reach double-digit wins without a Senior at quarterback.

Or you could go with the fact that Saban has never won 10+ games in a consecutive season. Can I have that 11-1 prediction back?

Isaac Madison out for 2009
Not a death blow for the Razorbacks, but it might take some shine off that "dark horse contender" vibe they had going.

Bryce Brown tweaks his hip
At least the Vols are getting a lot of their other players back. And are one day closer to naming a starting QB. Or not.

South Carolina's next head coach?
Phil Fulmer hopes to be back in coaching next year.

Fulmer, who will be 59 next month, said he’s already working on a staff.

Dave Clawson will presumably not be offensive coordinator.

Javier Arenas is not just a return man, because return men don't work
The man is nothing if not passionate.

I've been trying to tell y'all the whole time I was a cornerback. I came here to play cornerback. I didn't come here to return punts. ... I mean, when I'm at practice and we're doing 7-on-7, I don't go kick with the punters and catch punts all day. I go and work. If a guy calls me just a return man, that's disrespect.

Florida OC Steve Addazio will not call plays from the box
Which, all things considered, is probably a good thing for the Gators.

"That’s not my personality type," Addazio said. "If I’m up in the booth, I really might jump out of the window."

Then again, Tebow would just find a way to patch Addazio up, so it might not hurt all that much ...

Ask Georgia how that worked out
Alas, this is one big issue that the Gators have to work on. Have to.

Dustin Doe is still alive
But that's about all that's clear about the Florida LB's status.

Don't forget -- they also lose Louis Murphy
This is our presumptive league champion?

While the consequences for his actions from a legal standpoint have been met, he still has obligations to the Mississippi State football team that we will handle inside the football program.

That has "one game suspension against Jackson State" written all over it.

All those things I said about VT being able to replace Darren Evans?
Forget it. Okay, so Ryan Williams did a good job. But admitting you're uncoachable is a blaring red siren.

Kevin Prince, learn to recognize the color orange
At the rate this is going, you will see it very near to you many, many times Sept. 12.

Tebow doesn't mind. He'll just score 60 on your team instead of 50.
The Mayor has Florida ranked pretty low on the list of scariest opponents for the Dawgs. How low? Well, they beat out Tennessee Tech.

Let's just say somebody named 'Mus Galzahn'
Houston Nutt on what he might have done differently during his time in Fayetteville.

Not anyone in particular. Just a couple of people. Part I here.

This is offensive
Tailgating caviar? Brought to you by the University of Georgia.

We don't break our crystal
Southern Cal's national championship trophy -- the one they actually won -- appears to be, um, broken.

Notre Dame is 10-1 to win the BCS title?!?
Yes, they've gone up from 28-1, which was probably generous for those not living in South Bend. Alabama and LSU have also seen their odds improve. (HT: Roll Bama Roll)

Renardo Sidney ... still can't play for Mississippi State
But at least he can enroll for classes, which is progress. Now, if he can only explain that $1.2 million house in L.A. ...

ESPN will also carry SEC basketball
Kentucky is on four times and Florida and Tennessee are each on three Tuesday nights from January to March. With all the time given to the "name" programs, it's not a surprise that reigning tournament champion Mississippi State and SEC East co-champion South Carolina each appear just once. Vanderbilt will be on twice. Ole Miss and Alabama are also lucky enough to get an appearance. No one else in the conference -- including 08-09 regular-season champ LSU -- plays roundball, apparently.