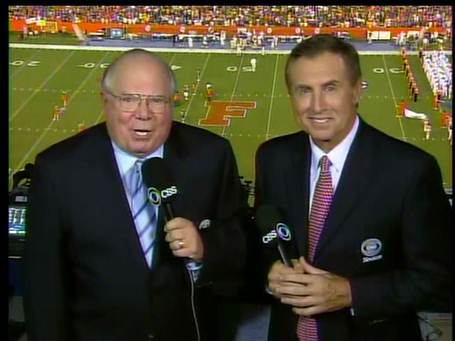 Verne and Gary, you have nothing to fear.

The SEC issued the "tweak" to its media policy last Friday, and the Tuscaloosa News has a good writeup on what changed. Essentially, it is less irrational about its restrictions and requirements for credentialed media members. The Gainesville Sun has a lot of quotes from media members, and it seems that by and large they're still unhappy and are hoping for further changes.

The fan policy remained unchanged, though the Sun article says it's still under review, and that was the subject of a piece by Michael Kruse of the St. Pete Times (H/T RTT). What makes it stand out is that Kruse actually contacted a lot of people to flesh out the intent and motivations behind that fan policy. Under it, spectators at games are not allowed to "produce or disseminate (or aid in producing or disseminating) any material or information about the Event, including, but not limited to, any account, description, picture, video, audio, reproduction or other information concerning the Event."

As a lot of people have said, the SEC isn't so worried about you taking pictures at games for your own enjoyment or calling your buddies to let them know what's going on. Even though those actions are technically against the fan policy, they in no way threaten anyone's revenue streams. If anyone ever gets booted for having a point and shoot camera at a game, I'll be shocked. If someone takes a professional DSLR and tries to sell pictures taken from the stands, that's a different matter of course, but the fact that cameras won't be banned at the entry gate means that your personal shots are fine.

What they're more worried about is videos taken from the stands. Low quality video from stadium bleachers is all over YouTube today. However, nice point and shoot cameras can take HD video now, and eventually cell phones will be able to do that as well. In order to keep getting huge stacks of cash from CBS and ESPN, the SEC has to somehow protect those networks' video rights.

Despite all the possibilities that Kruse's interviewees present, there's not a whole lot to be concerned with.

When it comes to quick highlights of key plays that we see on YouTube now, there's really no threat to the TV contracts. Even if someone publishes a highlight from the stands during a game, what is it competing against? Halftime shows, "game breaks," and programs like SportsCenter and College Football Final mostly. The viewership numbers of those are hardly what the networks are trying to protect, especially since they put video from those shows online anyway.

It's the live broadcasts that get the conference its money, and the fear is that people will eventually be able to do live streams of games from cell phone cameras in the stands. That's a bunch of worry for nothing though, because there are a number of reasons why live TV will always be a better experience than a live stream from the stands.

Single angle. A live stream will have one single camera angle: the view from the seat where it's taken. That view will not be ideal for the entire field, so people would have to watch multiple streams to get a comparable experience to watching games on TV. Let's see, would you prefer to juggle multiple video streams during a game, or would your rather let the telecast producer do it for you? Not only that, but you lose the niceties of TV like instant slow motion replays from those multiple angles and knowledgeable analysts like Gary Danielson showing you how plays work on the telestrator.

Quality. The cell phone carriers in this country will never let people stream HD quality content from phones. Even an SD stream would take up a lot of bandwidth, and having the general population stream video from phones would wreak havoc on their networks. If live streaming was ever enabled from a phone, bandwidth caps by the telecoms would ensure the quality is terrible regardless of how good the phone's camera is. You'd be better off watching on TV, especially since network latency would cause cell phone streams to be noticeably delayed.

Hands are not steady. It's pretty much impossible to shoot steady video with a hand held source. Even with a camera that can do image stabilization to cut down on jitters, there's still a matter of avoiding movement left and right or up and down that's more than image stabilization can handle. Would you rather watch The Blair Witch Football Game, or a TV feed from a professional camera that's anchored down?

Stadiums are not orderly. Let's imagine somehow a person conquered the stability problem. It's still a stadium with lots of people around making noise, bumping into others, and standing up and sitting down. The hypothetical live streamer from the stands would be dealing with all of those environmental issues and more, constantly needing to get up and down with the crowd and having to allow people by to get to the concession stand or bathroom.

The view from the live phone stream would frequently be obstructed by other people, which would be highly annoying compared to the unobstructed telecast. Realistically, in order to do a stream of any quality at all a person would need the cooperation of those around them. If you're attending a game, are you going to alter your actions to accommodate someone near you doing an illegal video stream? Of course not.

Game day enforcement. Shutting down a live streamer would be easy. If people want to be successful at doing live streams, they'll have to become popular. If enough fans on the Internet can find the streams to make them popular, then so can the conference. Enforcement officials could just watch streams and from the angle figure out where they're coming from in the stadium. Once they do that, they could just send a security guard to the sections with filmers and throw out them out. The filmers' tickets would be revoked of course, and how many folks do you know who would risk their seats to do something like stream the game from the stands?

If you shut down streams mid-game, people will stop bothering to watch them. Would you rather have to research and find dozens of stream sources for every stadium every week throughout the season, or would you just tune in to CBS or ESPN?

It's pretty clear once you think things through that live streaming from football stadiums is not going to happen thanks to the cell phone carriers and ease of enforcement. If it did happen, it would be thoroughly inferior to a professionally produced television broadcast. A few enthusiasts might watch a grainy, shaky, delayed, and constantly obstructed video feed from the stands, but it would never, ever become mainstream. And as I pointed out in the "Game day enforcement" section, shutting people down would be really easy.

I'm sure instituting a policy like this was a part of the contract negotiations with CBS and ESPN because there's so much money on the line. They have to put the rules on paper in order to enforce those rules.

The only thing that's really going to be threatened by the technological advancements of the next few decades is the SEC's new online video portal. It is going to be competing against DVRs with ever-expanding storage space and the video clips from the stands and recorded TV that people put on YouTube. However, if the conference builds the site intelligently by making it easy to find, view, and embed high quality clips, then it will beat out those competitors. Why go slogging through YouTube looking for that one key play from that one important game if it's easy to find on the SEC Digital Network?

The SEC media policy shows that there's some real fear in the conference about losing its plum TV contracts and in the networks about losing control over live sports, the only kind of programming they show that loses something by being time shifted. As long as they're smart about things and commit to quality though, there's really nothing much to worry about.