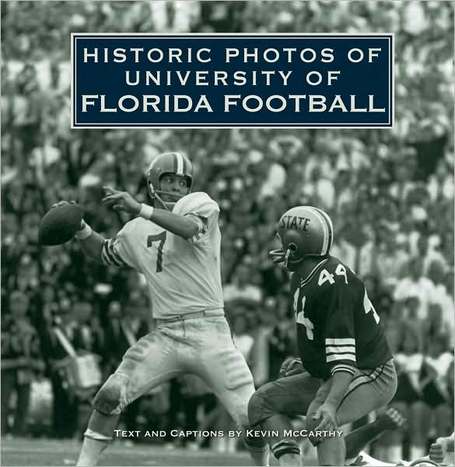 If I wasn't already a computer geek and former band nerd, I'd be a bit of a history buff. I enjoy seeing where things were and finding out how we got to where we are today.

As such, I thoroughly enjoyed Historic Photos of University of Florida Football. It's a walk through the ups and downs of Gator football from the controversial beginnings up until the first national title in 1996. Some of the old photos have been dug out of the state's archives and as a result have not been seen in decades. It was put together by Kevin McCarthy, an author and professor who has been at UF for 33 years.

The beginning of it explains why there is controversy about when the University of Florida football program officially started. The two major antecedents, the East Florida Seminary and Florida Agricultural College, merged in 1905 under state law and began school in 1906 as a combined institution. Therefore, the school counts its first season as 1906. Folks get confused though because FAC took on the name "University of Florida" in 1903, though it wasn't yet the university in its final form, and therefore some count the 1904 FAC team (which was just a club team anyway) as the first UF squad. Both FAC/proto-UF and EFS had separate teams up until the merger, and photos of each's 1902 team are provided in the book.

The old photographs from the beginning are pretty neat, as they show how the campus used to be, spectators watching from cars at an early game, and university presidents posing in the team pictures. Florida was actually pretty good in the 1920s, with the 6-1-2 1923 team earning the nickname "the Orange Blossom Terror" and the 8-1 1928 team leading the entire country in scoring.

The book is filled with bits of history and trivia in the captions to the photographs, allowing you to learn while you enjoy the images. Each page has a single black and white picture with a caption; the only prose in the book is in short introductions to various eras in the program's history. It's not all just shots of players too. You get to see the campus and stadium grow, cheerleader uniforms, the band, homecoming and bowl pageantry, trainers, coaches, broadcasters, and just about everything that goes into the game of football. It's all there.

If I had to nitpick the book, I'd mention two things. First, it doesn't have nearly enough of the cheesy staged action shots from back in the day. You know, when a player would be shown making a mean, angry face or doing some wildly athletic pose without a helmet and with an empty stadium behind them. I can't get enough of those things.

The second is that the book mostly dismissed Charley Pell, head coach from 1979-84, as a "disappointing" coach who largely just kept the seat warm between Ray Graves and Steve Spurrier. While it's true that Pell got the program on serious probation, he also built up the university's booster clubs and expanded the stadium. His modernization of the Florida program laid the groundwork for the explosion of success that Spurrier would experience and for the ascendancy of UF's athletic program to the upper echelon of money makers.

As I said before, Historic Photos of University of Florida Football is a walk through Florida history in pictures. If you enjoy learning about the past, or just enjoy looking at old timey photographs, then this book could end up in a permanent place on your coffee table. If you're not a Gator fan you'll have no interest in it, but you knew that going in.

At the moment, Amazon has it for $28.76, which is below the suggested $39.99 price. That's good, because I don't know if it's really a $40 book. At the lower price though, with Amazon's free shipping, it's certainly worth a look as a keepsake or as a gift for a Gator in your life.

Full Disclosure: The publisher sent me a free copy of the book to review, but it did not attach any strings to it. I could have written a negative review had I not liked it, but as a born and raised Gator, I did like it quite a bit.