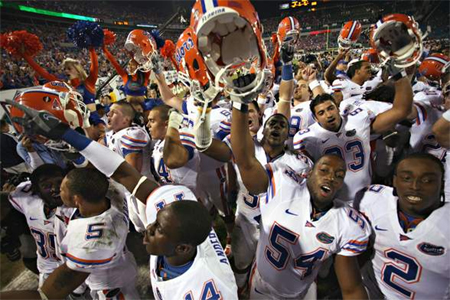 TWELFTH IN A SERIES :: The 2008 Florida Season Review

The situation in 2009 is quite remarkable for Florida, given recent years. The 2005 and 2006 teams were unwieldy hybrids of the old Zook regime and the new Meyer regime. The team was so young in 2007 that even the die hards needed a program to figure out who was who for half the season. The 2008 team did its work with almost no seniors to speak of.

Now, everything is built in the image of Urban Meyer. Now, the team is stocked with household names. Now, we can talk about real senior leadership on the squad for the first time in three years. Despite all of that, not to mention the incredible run of the past couple years, questions have nagged the team.

When you've won two national titles in three years, what do you do for an encore? How do you stay motivated when your fingers are so laden with jewelry? When you're a quarterback who's done that and won a Heisman in between those national titles, how do you follow it up?

Those are just some of the questions that have followed Florida throughout the off season. With so much time between the end of the bowls and the beginning of the upcoming campaign, the questioners have also been searching for the right analogy for what everyone has presumed would be the national preseason favorite.

Comparisons with this decade's USC teams have been rampant. Are the 2009 Gators another 2007 USC, the last unanimous preseason No. 1? Are they the much hyped 2005 USC team that had a Heisman winning quarterback spurning the NFL for one more season that ultimately fell short? Saying no on the first account is rather easy, given the disparity between Tim Tebow and John David Booty. The 2005 USC comparison is also simple to debunk since that Trojan team allowed 361 yards and 22.8 points a game, far above what the Gator defense will surrender this fall.

Perhaps the best analogy is to the last major college sports team to repeat: the 2006-07 Florida basketball team. It had lots of key players spurn the pros to make another run for a title, just as several did for this year's football team. You can even draw direct analogies between some players. Tebow is like Joakim Noah, the straw that stirred the drink for the team and the guy all non-Gators hated. Corey Brewer forsook NBA dollars for a year that could have helped his father out with medical problems; Brandon Spikes has forsaken NFL dollars for a year that he plans to use to get a good lawyer to get his brother out of prison.

The Gators have undergone the toughest off season conditioning yet under Meyer, and unlike in 2007 when the team practically took the summer off after winning a title, the players are focused and working hard. A lot of guys are looking forward to two-a-days, the most grueling part of the off season workouts, instead of dreading them. This is a team that knows it will take everyone's best shot, so it has been preparing appropriately.

Even though Tebow swears going undefeated is not a goal (though it is in their minds), it has got to be the goal for the team. He and Spikes didn't return to go 13-1 again and hear choruses of people saying others have equally legit claims to the throne. Tebow even mentioned that a perfect season was among last year's goals in his (in)famous promise speech from after the Ole Miss loss, so it has to be one this year. Florida has never gone undefeated in a full season, making it the only one of the state's Big Three not to have done so. It's the only way you can improve on a one-loss season.

Gator fans have been incredibly fortunate that all of the best UF teams since 1991 have won the SEC with just one exception: 2001. Three of the four teams that played for the national title won it, and two of those teams had an amazing set of dominoes fall for them to do so (1996, 2006).

This 2009 Florida team will absolutely be one of the best since 1991. If it wins the SEC it will play for the national title. Whether the good fortune will continue, I don't know. The best course would be to simply not give chance the opportunity to go against them.

Leaving no doubt is the only option.