It's sometimes interesting to peruse through the blogs focused on various teams, just to get a feel for how the fan bases feel or what's really going on with a team at the kind of granular level that the mainstream media doesn't always get to. This is, of course, a particularly important task for someone who aspires to blog about the entire SEC.

As part of that exercise, your humble correspondent came across an interesting and optimistic post from Paul Westerdawg the other day. Among his thoughts on Joe Cox:

I think it was Buck Belue who said Joe is probably the #3 QB in the SEC right now. Hard to disagree on that one. The only other viable candidate for #3 QB is Jefferson at LSU. 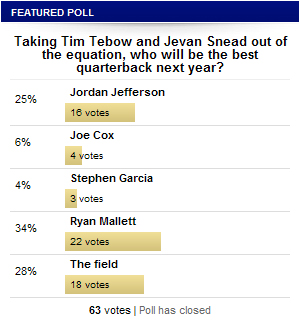 Now, unlike ESPN, I know better than to take a Web poll -- with 63 votes, no less -- and portray it as the thoughts of the wider SEC fan base. However, the idea that Jordan Jefferson is the only possible competitor to Joe Cox for the title of No. 3 quarterback in the conference seems to have been rather roundly rejected by a group of SEC fans. Indeed, Cox comes in fourth, behind the field; given the choice, the overwhelming majority of those who voted in the poll looked at Cox and somebody else and pulled the lever for somebody else.

In other words, it is not "hard to disagree" with the idea that Cox is the third-best quarterback in the SEC. I happen to think he's got almost as good a chance as anyone else, but there is almost no evidence to tell us whether he's more D.J. Shockley or Joe Tereshinski. I actually thought about including a chart of the relatively new QBs and how they've done in games in which they attempted more than 10 passes (as opposed to the meaningless "starts" statistics) -- but the number of games qualifying for Cox would have resulted in a miniscule sample size of two. The guy has attempted 53 passes in three seasons. This is not a reason for writing either the legend or the obituary of Joe Cox.

(Westerdawg's criticism of South Carolina's secondary is also curious, given Georgia's own precarious situation in that area. More on that in a moment.)

One area where Westerdawg is spot on, and where Georgia fans have legitimate reason for optimism, is along the offensive line. A lot of veterans return, and should bring some much-needed cohesion with them. That said, the line wasn't actually as bad last year as you might remember; it allowed just 17 sacks, though it also allowed multiple sacks in games against South Carolina (a near-loss), Alabama (a loss), Florida (a loss), Kentucky (a win), Georgia Tech (a loss) and Michigan State (a win).

At wide receiver, I know you'll be shocked to learn, the Dawgs are led by A.J. Green (56 catches last year for 963 yards and 8 TDs). Michael Moore should be a solid No. 2 option, and he's complimenting freshman Rantavious Wooten as a potential playmaker. Tavarres King has only made two catches before, but took them for 41 and 25  yards, so he could be a good option for the medium-to-long ball. Tight end is a bit of a mystery, though front runner Aron White has shown some promise in very limited action. (Two of his three receptions last year were for TDs, and he averaged 29.3 yards per catch.)

Caleb King and Richard Samuel are the most experienced among several players jockeying for snaps at running back, and there is talk of a running back by committee setup.

On defense, the front four will likely be strong as long as they can get and stay healthy. If not, there could be some problems. Jeff Owens returns after starting all 13 games in 2007 and getting injured in last year's first game. Geno Atkins, more impressive in his 2007 sophomore campaign than last year's junior effort, is nonetheless a force. Rennie Curran -- he of the 115 tackles, 10 for loss including three sacks, and 14 quarterback hurries -- returns to lead the linebacking corps.

Secondary is another intriguing part of this team. Georgia returns a pair of starters to the unit, by Phil Steele's count, and many of its members spent last year locked in an interception battle with a backup defensive lineman. SS Reshad Jones is one of the ones back after leading the team last year with five picks. FS Bryan Evans will get his tackles.

There's plenty of talent on this team, no doubt. Enough for Dawg fans to be optimistic without prematurely anointing Joe Cox.