Does Mark Richt Do Best When Expectations are Low?

Share All sharing options for: Does Mark Richt Do Best When Expectations are Low? 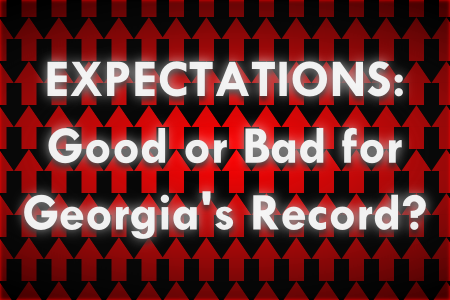 In Monday's past as present post, I made a comment regarding this off season's meme about Mark Richt doing best when expectations are low. I've seen it in several places, but here are a few:

"The last time Georgia entered a season with relatively modest expectations was 2005. That team, picked third in the East Division, won the SEC."

"The last time the expectations were this low, 2005, Georgia won the SEC East."

That's enough for now. Whether explicitly, as with Steele, or implicitly, as with the last two, there seems to be a widespread belief that Mark Richt does great work when expectations are low.

I have a feeling that's largely due to psychology. If a team is expected to finish in the top ten and does, then it's not particularly notable to anyone who's not a fan of that team. If it is not expected to be a top ten team and does end up there, then it's a more memorable event.

Before I launch into the full fact checking behind this idea, I feel like I have to defend it first. Most everyone agrees that preseason polls aren't worth the effort used to create them. I would tend to agree, at least when it comes to predictive power. However while they are awful at predicting future events, they do have a mental impact on players and coaches. As UGA defensive coordinator Willie Martinez said, "We’d rather have low expectations, because it’s a lot easier to motivate when things aren’t expected of you. They had to listen to it every day... we had teams gunning for us, and if we didn’t play our best, we were going to get embarrassed, and that’s what happened against Alabama and Florida."

There are couple things to test here. First is whether Georgia truly hasn't faced this low of expectations since 2005, since that's an easy one to do. Then after that, it's whether Richt does best when expectations are low. Here is a table of where Georgia has been predicted to be and where it has ended up. The consensus comes from Stassen, and the 2009 numbers are as of today's date, July 7:

As for the other part, I would first ask you what constitutes "low expectations." Pretty much every year the Bulldogs have been expected to be a top 15 team, and in the grand scheme of things, that's not low expectations for an upper tier Big Six conference program. It's not necessarily "high" expectations, but they're certainly not low. By Georgia's (and Richt's) standards, only 2001 had "low" expectations, and UGA's finish was right in line with them.

In fact, Georgia has finished more than five positions away from its preseason consensus rank in only four of Richt's eight seasons. In 2002 Georgia finished six spots higher and in 2007, it finished 12 spots higher. In 2006 Georgia finished seven spots lower and in 2008, it finished 11 spots lower. When it comes to appreciable deviance from predicted rank, Richt is evenly split between upside and downside surprise.

Only three times has Georgia finished more than one position in the standings away from its preseason consensus point under Richt. In two of those cases, 2002 and 2005, UGA won the division when pegged at third. The other was in 2006, when the Bulldogs were predicted for second and finished fourth (technically tied for third, but they lost to fellow 4-4 team Kentucky). It would appear that at least in the standings, when a significant change happens its for the better.

However, did those upward surprises come in seasons with low expectations? For the record, in each case Tennessee and Florida were projected to be above the Bulldogs.

Georgia was predicted to be ninth in the country in 2002. I can't call a preseason top 10 slot "low expectations." I just can't. UGA was expected to be among the nation's elite, and the fact that UT and UF were too but couldn't measure up doesn't have a thing to do with Mark Richt's coaching. Well it did in Tennessee's case to a degree since the Bulldogs beat the Vols.

In 2005, the preseason No. 13 rank is a bit lower, but it's still just middle of the pack for Georgia's entire range of preseason poll rankings since '01. It's not low in absolute terms (because top 15 is not "low") and it's not low relative to Richt's tenure. The upward move in the standings had as much to do with Tennessee's collapse and Florida's being a mild disappointment than it did anything Georgia happened to do (especially since the Gators beat Georgia and finished just one game behind in the East).

If you want to boil it down to the most simplest, you get something like this: when Georgia has been picked to win the East, it has not done so; when it has not been picked to win the East, it has done so three of six times. The overall issue isn't that simple though. When you're talking about rankings and standings, every team is intertwined with the others. Georgia's 10-3 record was "disappointing" last season, but, for instance, had Florida lost two more conference games and UGA still got to go to Atlanta, then it would not have been as disappointing.

Eight seasons is not really a large enough sample size to prove anything for sure, so would say the evidence is solidly inconclusive. Among Richt's four lowest predicted ranks, he's outperformed twice and underperformed twice. It's nice to have fond memories of the 2005 or 2007 teams sticking it to the critics, but as a legitimate trend for use in preseason predictions, the claim about Richt doing best when expectations are lower simply doesn't have enough evidence behind it.