Share All sharing options for: SEC 2009 // Georgia Looks for Direction 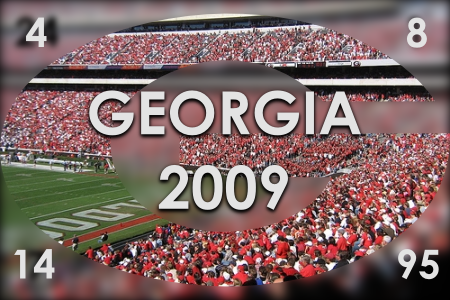 This year, Georgia provides an excellent example at how the off season echo chamber works.

Initially, there were great concerns about Georgia and its losses of Matthew Stafford and Knowshon Moreno. The early wisdom was that Georgia would be taking a step back from 2008. A representative example would be Dennis Dodd from back in January, who had nothing but questions and the Bulldogs at No. 20 in the nation.

A funny thing happened though. Over time, the consensus began to warm up to Georgia. Dodd himself went from fully criticizing UGA to, "the Bulldogs seem like they're going to be OK." Somewhere along the line, the meme about Mark Richt doing his best work when expectations are lower cropped up too (more on that later in the week). Georgia gradually became almost a trendy contrarian pick, not necessarily to compete for a whole lot but at least to be an upper tier team.

With that said, I think it's worth a look at what precisely Georgia did last year to get an idea as to where they are coming from for this upcoming season.

You could make the case that UGA's best win was the 56-17 romp over Central Michigan, as the Chippewas were a decent MAC team and it was one of only two wins Georgia had by more than two scores (I-AA Georgia Southern excluded). The other was a 17-point win over 5-7 Arizona State. Among its wins over Big Six conference competition, Georgia's best win was the 52-38 win over LSU. The 52 points were tied for the second most that a Mark Richt team has scored in SEC competition.

The flip side of that win is that the Bulldogs gave up 38 points in the process, one of five such occasions on the year that the defense did so. The offense on the other hand only made it even to 30 just four times against Big Six foes, and in one case (Alabama) a big reason was due to accumulation of window dressing points after the game had long been decided. In games against Big Six teams, Georgia's average margin against those under .500 was 11 points, against seven or eight win teams 8.75 points, and against nine or more win teams -10.25 points.

Best as I can tell, Georgia was a good but not great team. It took late game heroics to pull out wins over South Carolina, Auburn and Kentucky. Against the two elite teams on the slate, Georgia got run out of the building. UGA may have won 10 games, but the Bulldogs didn't play like a 10 game winner (and haven't since 2005, incidentally).

As for 2009, the offense will probably not be as good. The only position on that side of the ball that will definitely be better is the line. Joe Cox will be fine but he's no Stafford, a committee of any kind won't match the effectiveness of a top flight back like Moreno, and it's hard to be sure that A.J. Green will have a great sidekick in the way that he was to Mohammed Massaquoi last season. Marlon Brown and Orson Charles certainly have the potential to be that, but that would require Georgia hitting the freshman receiver lottery two years in a row. It's not impossible for one of them to produce up to the standard that Green set last year, but it's not likely. Most freshmen simply don't; that's what makes Green so special.

The defense is where the true concern should be anyway. That unit's number of points allowed per game has risen every year since 2005 ('05: 16.4; '06: 17.6; '07: 20.2; '08: 24.5), and the bottom really fell out in the second half of last season. Injuries were a killer to be sure, but there's no reason why anyone in the SEC, much less Georgia, should have allowed 38 points to Kentucky's dismal offense last year. Getting defensive lineman Jeff Owens back is a huge help and the linebackers look great, but the secondary is a bit green. Getting great play from the front seven will therefore be critical.

So what does Georgia look to get from this season? By going with the senior Cox at quarterback, the coaches are signaling they want to win this season despite nearly every other position on offense looking like a "building towards next year" scenario. Defensive coordinator Willie Martinez's unit will have to show some definite improvement or else he's in serious danger of losing his job.

In other words, it's all about direction. Now in his ninth year, Richt is beyond the window that coaches have generally won national titles in the BCS era. It's also getting close to the point where many SEC head coaches see their tenures end, whether by their own decision (Spurrier resigned after 12 years at UF) or not (Nutt and Tuberville each lasted 10 years at Arkansas and Auburn, repsectively). There is nothing in Richt's record at Georgia to suggest a sane person would want to relieve him of his duties, though as I said, Martinez is squarely on the hot seat.

There certainly is precedent for quick defensive turnarounds in this league, especially recent precedent. Florida and Tennessee gave up 25.46 and 27.29 points per game, respectively in 2007. In 2008, they allowed just 12.93 and 16.75 points a game. The conference schedule gets easier, as the Bulldogs trade Alabama for Arkansas and get LSU at home, but it starts with a trip to Oklahoma State and ends with one to Georgia Tech. Arizona State is still there, only this time at home, but the Sun Devils would figure to be improved to some degree.

While last year's 10 win season was a disappointment, I have a feeling 10 wins this year would satisfy most every Georgia fan. A sideways direction in record would show that Richt is able to take what would be a rebuilding year for most programs and turn it into a success. Even if Georgia can't hit the 10 win plateau again, I think reasonable Georgia fans would be okay with it if it wasn't too far under 10. I suppose it all depends on whom the losses come against.

UPDATE: Since there seems to be a lot of confusion, I want to make this clear. I do not (repeat: NOT) think Georgia is in for a rebuilding year. What I said was that on offense Georgia will be doing a lot of building for next year on offense (which is what all teams do when they're not likely to win a championship of some sort), and also that losing the talent that Georgia did would cause a rebuilding year for a most programs. I do not (repeat: NOT) include Georgia in that group of "most programs." The whole point was that UGA under Richt is not like most programs. That is all.

MONDAY: Past as Present
TUESDAY: The Schedule; The Secret Life of Evil Richt
WEDNESDAY: The Depth Chart
THURSDAY: Predictions
FRIDAY: Feedback and Conclusions