Has South Carolina Underachieved Under Spurrier?

Share All sharing options for: Has South Carolina Underachieved Under Spurrier? 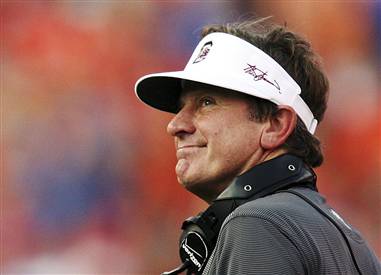 The question that makes up the title of this post is one often asked, and it's a theme I touched on in Monday's past as present post. I also ran across this quote from Phil Steele today, and it prompted me to do this post:

"I felt USC had the talent the last two years to finish higher than they did in the SEC East. This year they have 11 returning starters (second fewest in the SEC). Spurrier’s squad overachieved in his first season but I feel they’ve underachieved the last three seasons and could easily turn it around."

That's some prime hedge work there, but it does lay out something concrete: SC overachieved in 2005 and underachieved since. Well, there's few things I enjoy more than a good fact check, so away we go.

Over/underachieving ultimately is based on an expectation. Steele bases his on talent. My favorite way to go is with Pythagorean expectation (a.k.a. Pythagorean wins), which gives an approximate win percentage your team should have made it to given the number of points you scored and allowed.

Here's the differences in South Carolina's Pythagorean and real wins under Spurrier (I-AA games have been omitted):

When you see a difference between -1 and 1, that means it's fairly negligable. The 2005 season does come pretty close to overachieving expectations though, as positive 0.87 is close to one. The 2006 season is the only clear indicator either way, with the team underachieving by more than a game. I bet I can guess which game it was they were supposed to win but didn't.

So at least from a performance standpoint, South Carolina has been spot-on with its records the past two seasons. That's not what Steele was talking about though; he believes the performance didn't match the talent on hand. Indeed, take a look at the Pythagorean win percentage over the past four years:

After the near-customary second year bump, performance (as defined by this method) has declined. Or has it?

One thing that folks who work with Pythagorean expectation agree on is the fact that blowouts are outliers that can skew things quite a bit. That's why I always take out games against I-AA competition. No one seems to agree on what the cap for blowouts should be (or even if caps are the correct way to deal with them), but they do make a difference. Take Arizona from last year for example. Its PyWin percentage was .783, until you remove its 70-0 win over Idaho at which point it drops to .712. That's nearly a ten percent swing.

Spurrier's outlier from last year was the 56-6 fire bombing delivered by his alma mater. Remove that one from the mix and the PyWin percentage for the Gamecocks jumps from .467 to .595, an even larger move that Arizona's thanks to all the close games South Carolina played in.

That tells me that there could be some of that hope that Gamecock fans are so familiar with. As bad as things got from time to time, the team wasn't a complete disaster. A .595 winning percentage projects out to seven wins over a 12 game schedule (Florida and I-AA opponent excluded, bowl included), then add the freebie against the I-AA team for an eighth win. That's not the makings of a great team, but it's better than the dire predictions some have been assigning to the team.

I'm okay with leaving out the Florida game in analyzing last year for the benefit of looking at next year, mainly because there is no more hope of taking down the Gators in 2009 as there was in 2008. The Gamecocks won't be a ghastly -11 in turnover margin again, and Stephen Garcia will play better thanks to new quarterbacks coach G.A. Mangus and him not being yanked every third drive for another guy. The defense will have some trouble overcoming its losses, but it won't fall off the map with the vets they do have returning and the steady hand of DC Ellis Johnson at the wheel.

The schedule isn't that forgiving, but yes, there is hope for 2009. There was improvement from 2007 to 2008 (the game in Gainesville excluded), and the weak half of the team should improve. Winning 10 games is probably out of the question, but another six win campaign is less likely than some would have you think.