Share All sharing options for: SEC 2009 // The Last Savior We Had Around Here Didn't Do So Well

What jumped out at me, though, was the Doc's chart. It pretty clearly showed that this was no "golden age" for the Gamecocks, something that took me by surprise. Part of this, of course, is because my Gamecock fandom is relatively short-lived; I never really paid attention to South Carolina until I decided to attend in 1998. My first season on campus was a disastrous 1-10 campaign, followed by an utterly embarrassing 0-11 mark.

But let's look a little more closely at the Gamecocks' winning percentage just in the SEC, which strips away a nonconference schedule that can vary widely from year to year. 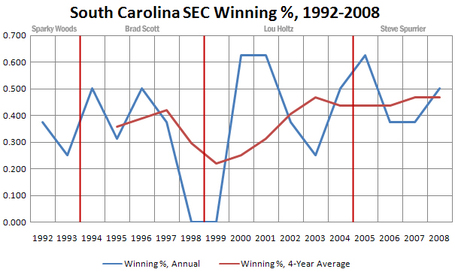 And herein lies the reason that some South Carolina fans feel better about the program now than they did before Spurrier came -- no huge peaks, but no deep valleys either. The Head Ball Coach has brought a semblance of consistency to Columbia -- something at which Sparky Woods never got a chance and at which Brad Scott and Lou Holtz failed.

Ah, Lou Holtz. The last "savior" of the Gamecocks.

Questioning Lou Holtz can be a dangerous place for a blogger, particularly one who covers South Carolina, to be. Holtz's relative success -- the climb in the average winning percentage doesn't lie -- gained him quite a bit of goodwill in Columbia. It is not out of the question that, had he decided to run for governor in 2002, he might have had greater success than he had at running the football team that year. (Coincidentally, this would have presumably saved South Carolina the whole Argentinian mistress affair. Win-win proposal.)

But there were also problems off the field, some of which drew national attention, some of which didn't. Discipline had almost entirely broken down, the most obvious symptom of that being the season-ending brawl with Clemson in 2004. Most non-South Carolina fans, though, didn't follow what happened after the players were told they would not be attending a bowl; in the end, six players were charged with stealing $18,000 worth of items from the athletics department. [EDITOR'S NOTE: Second item in link.]

And then came the situation with South Carolina's nutrition program during the Holtz Administration, nicely summed up in this sentence from a story about Spurrier's first days in Columbia: "Keeping his Gamecocks away from fried chicken could be as big a job as turning them into consistent SEC winners." Yes, players under Holtz were apparently allowed to wander over to a fast-food establishment across the street and order up some fried chicken when they felt the urge.

Finally, the NCAA sanctions came down for five major violations -- making South Carolina the third school punished for breaking the rules in the wake of Holtz's time there. Holtz's response to the NCAA decision -- which he presumptuously ordered a reporter to print in full -- was typically self-serving. He pretended to take responsibility for one of the violations while throwing everyone else under the bus. His excuse for the violation he pretended to take responsibility for was that he was trying to keep athletes from dying. If you doubt me, follow the link above; I couldn't make that up if I wanted to. (Holtz's assertion that South Carolina received "three years probation without any restrictions" is true only if you don't count a loss of two scholarships for two years each as restrictions.)

I could seem ungrateful for what Holtz did for South Carolina, and I shouldn't. While it's irksome, and typical, that he will be the first to tell you that Spurrier likely would not have come to Columbia had it not been for what Holtz accomplished -- well, he's probably right.

Spurrier, though, seems to have run a relatively clean ship. Some of his disciplinary decisions seem a little weak at times, but they are positively draconian compared to the repeated chances Holtz gave Derek Watson. And I feel pretty confident that the players aren't ordering fried chicken for lunch.

So if you ask me if I want the sugar rush of Lou Holtz's great two years followed by a three-year slump and the collapse of the program, or Steve Spurrier's more balanced accomplishments, I think I'll go for the latter.

It will be easier as Gamecocks fans to look ourselves in the mirror when he steps aside for the next man who will save South Carolina football.