Classic Moments in Bad SEC Ads: On the Hunt

Share All sharing options for: Classic Moments in Bad SEC Ads: On the Hunt

One consequence of SEC football's popularity is that its major personalities often end up in advertisements. Since they are football coaches or players and not actors, and because the ads are usually produced by local ad agencies, we often end up with hilarious results. Over the course of the offseason, we'll be highlighting some of the best ones.

The Setup: Steve Spurrier and his good friend the Yella Fella are on a jungle safari looking for a rare breed of animal. Just when Spurrier is ready to give up, they happen upon a clearing...

If I had a dollar for every Spurrier/Osmose ad I saw while growing up, I'd be the one stimulating the economy right now instead of the feds. Thanks to my family's weekly routine of watching the Steve Spurrier Show during lunch after church in the fall as I grew up, I will probably be able to recite the slogan, "If it doesn't say Osmose on the little yellow tag, believe me, you don't want it" until the day I die. I'm sure many of you out there can relate.

I wouldn't find out until much later that the Yella Fella himself is actually an Auburn booster, which makes him odd company for Spurrier to be traipsing through the jungle with. Although, if Steve's automatic first analogy for everything is pressure treated lumber like it is in this spot, then hey, stranger pairs have existed. I'd also like to know what exactly the people in yellow were tailgating for in the middle of a jungle.

Spurrier is far from the only coach to appear in one of these spots (see also: Jim Donnan), but unfortunately, not many of them are out there on YouTube. I'm sure everyone's got a favorite one; they're bad, but they're memorably bad and that's what counts. The one above is just the tip of the iceberg when it comes this series of pitches that go back to the times when Gene Stallings and Pat Dye were the on-screen talent. Maybe now that the Yella Fella has his own YouTube channel (yes, really), some of the old classics will resurface.

So, how to grade this one? Well the type of commercial is classic (Osmose), and it sure is about as trite as they come. However, this came from late enough in Spurrier's career that he seems to actually be trying to be a good actor in it, instead of shooting darts at the cameras with his eyes as some other coaches have done. It's missing something, but I can't quite put my finger on it... 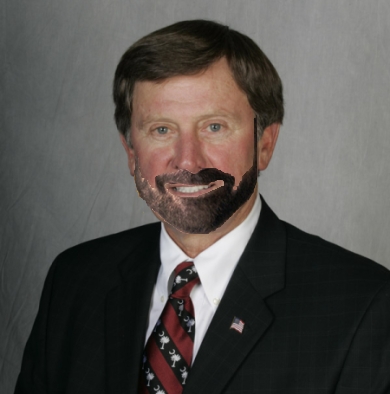 Ah yes, there it is. Get that man a blue shirt, and I'll build a deck off my apartment's balcony.

As a side note, I considered reviewing Spurrier's Digiorno commercial with Tyrone Willingham. However upon further review, it's even more painful than I remember. The Otters? Getting outsmarted by Ty? Augh. The official score of that one is: destroys my childhood. See also: "Yeaaaah, click clack."

Got a tip on one for future review? Shoot an email to year2.blog at gmail dot com.