10:55 a.m. ET We await Nick Saban's appearance, much like the huddled masses in the lobby of the Wynfrey hoping for a glimpse of their great leader. 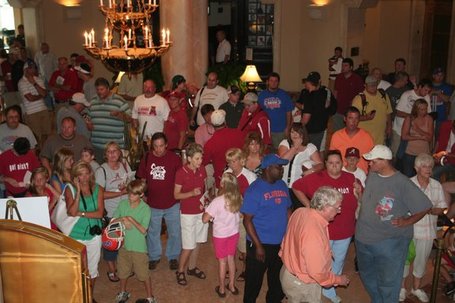 11:03 a.m. ET The Sugar Bowl is Andre Smith's fault. Paraphrasing, of course, but that's pretty much what Saban just said.

11:09 a.m. ET Nick Saban glows in the dark, as Joel's picture here shows. There's no light being used in the room behind the red illumination pulsing from Saban.

11:10 a.m. ET Someone just had the audacity to tell Saban he looked like he lost weight. This reporter is now being dragged from the room screaming. Saban is saying, "To the rack with him."

11:14 a.m. ET "I think the SEC West is going to be pretty tough this year." Capt. Obvious, until he says "every team in our league on our side of it ... has a chance to win the championship." As he rattles them off, he oddly omits Mississippi State. Okay, not oddly.

11:15 a.m. ET "I know that I coached for four years with Bill Belichick." Actually, I can't knock him

11:16 a.m. ET Saban voted for Tim Tebow. "I think he's one of the most outstanding leaders I've ever seen in my coaching career." He also says someone shouldn't be criticized for his vote. "I think that's what a lot of people have fought for in the country." Yes, we stormed the beaches at Normandy so someone could vote Jevan Snead for first-team All-SEC.

11:19 a.m. ET Saban also isn't a fan of criticizing the NFL for having a hard time evaluating Tebow. He doesn't get that Tebow is now the SEC, does he?

11:24 a.m. ET The Blind Side movie? "I really enjoyed the movie -- and it's the takes that get you. It's the angles." Seven takes -- wide angle and a camera on each person. "I have a very small part." Team has voted not to see the movie. "They don't want to endorse anything like that that I was involved in." LSU fans are now trying to find Saban's cell phone number to pass out.

11:30 a.m. ET He's asked about the chirping. "I think we have a great league and I think everybody should respect our league."

11:35 a.m. ET Someone asks about the 85-player limit. How did Brian Cook get a credential? "We have a demanding program" on and off the field. "None of those players are leaving because of the kind of football players they are, from our standpoint."

11:40 a.m. ET Will Alabama fans be okay with Saban donning yellow and purple in The Blind Side? "I'm hopeful that all of our fans will reailze that this movie was [about] a historical event," he says. Two years in Tuscaloosa, and he still doesn't know the fan base very well.

11:42 a.m. ET "Not ashamed for a minute" of his team in SEC Championship Game. What about the Sugar Bowl?