If we're in late July, then college football is so close that you can almost taste it. And you can spend parts of your weekend watching the thrilling 2004 game between Iowa State and North Iowa. Or, even better yet, the 2006 tilt between Missouri and Ole Miss.

For current news, though, it's almost time for SEC Media Days. As with last year, your humble correspondent plans to liveblog the proceedings, which are sometimes more interesting than you might think. Joel from Rock Top Talk will also be in Hoover, where he can hopefully elude the legal machinations of the Alabama faithful.

Also on deck: Wrap-ups of each team's presentation will post each day after the briefings are done, and we'll do an edition of Team Speed Kills Now every night from the Wynfrey (somewhere else Friday, seeing as how checkout is in the morning). Your humble correspondent will be joined by Joel on at least a couple of the nights and visits from some of our SB Nation colleagues covering that day's teams.

Hopefully, we'll get a more specific schedule shortly, so I can tell you whether Mississippi State will be in our room at 4 p.m. ET or 5 p.m. ET. That's a "for-example," by the way; I know most of you are not waiting with bated breath to find out when the liveblog of Dan Mullen will begin.

Meanwhile, a few of the potential story lines for SEC Media Days are starting to emerge.

First, expect Mike Slive to celebrate the gazillion-dollar television deals the conference and ESPN have been handing out like Wall Street bonuses. Not only are the conference brass rolling out the first three weeks of scheduling for the SEC -- revealing who gets the coveted Charleston Southern at Florida match-up -- but ESPN plans to finish its conversion to The SEC Network by rolling out an "SEC on ESPN" logo.

We should point out here that the SEC isn't the only league getting its own logo for football. No, the network is giving one to the ACC as well. 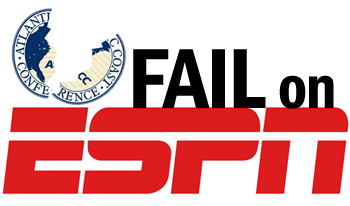 Hey, they have to comply with truth in advertising laws.

Expect to hear every coach asked whether they voted for Tim Tebow to be the first-team All-SEC quarterback. I say this not just because there were plenty of questions raised about the Golden Tebow being a non-unanimous pick for the first team last week, but because at least one attendee has said he plans to ask each coach whether Tebow was atop their ballot.

And, of course, this is Boy Wonder's first trip to the Birmigham-area festivities. This could get really interesting depending on what happens when Jesse Scroggins announces his commitment Wednesday. If he chooses Tennessee, Kiffin will probably wear a flashy suit and start with a "How's it going in the state soon to be pwned by Tennessee!!!!" If Southern Cal is the final destination, except a hail of, "And who exactly is going to be quarterback in 2010?" questions. Along with, of course, 20 variations on "Are you crazy? Or simply out of your mind?"

Other possibilities: Nick Saban running off every other player on Alabama's roster, will Steve Spurrier and/or Rich Brooks retire and some bizarre feature idea that will lead to every coach being asked a question along the lines of whether they like corn pone.