The Transition From Raycom to ESPN Isn't All Wine and Roses

Share All sharing options for: The Transition From Raycom to ESPN Isn't All Wine and Roses 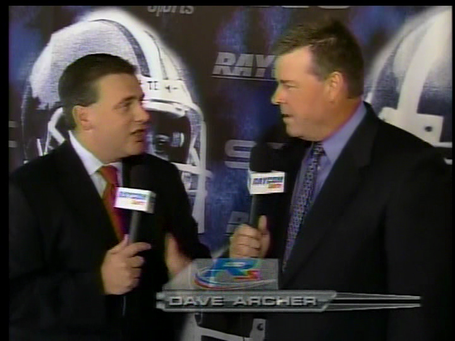 I've been meaning to write about this since the SEC-ESPN deal was announced, but I procrastinated and now Heath Cline has beaten me to it:

Out of seven announcers ESPN assigned to the SEC packages, was it really a stretch to hope the number with SEC ties would be larger than the number of Seattle residents? It's not that these people aren't capable broadcasters, but they have zero feel or understanding for what makes the league special.

...The network has continued its inexplicable practice of largely excluding conference alums from their announcing teams. Florida has Jesse Palmer, known more for his reality show than his college career, and Erin Andrews at the network. Rece Davis is an Alabama grad. That's it. More Canadians cover college football for ESPN than do SEC alums (yes, Palmer counts as both).

Say what you want about JP/LF/Raycom and the three Daves, and someone probably has, but the folks there loved the SEC. They knew what they were talking about and had longstanding relationships with people inside the league. When they talked with enthusiasm about the personalities, teams, and traditions, you knew it was genuine.

Some have snarkily suggested that ESPN has become the SEC Network. While the new contract will prevent the need for an SEC Network, Cline's count shows that there aren't a whole lot of SEC people in the network's college football department. Palmer, Andrews, and Davis are the only SEC alums, and the former SEC coach roster at the WWL includes Lou Holtz and Jim Donnan (and previously Bill Curry and Gerry DiNardo).

I don't know how that measures up proportionally to other conferences, but all the former SEC folks won't be centrally located on the conference's coverage. You can forget about starting the day of SEC football with a loving prelude to the main course on CBS at 3:30. Dave Neal has made the move to ESPN, which is not altogether surprising as he was always the best of the Daves, but he'll likely be forced to tone it down some by the corporate overlords. Neal will be joined by a former Houston quarterback (Andre Ware) and someone whose experience is almost exclusively in the Pacific and Mountain time zone (Cara Capuano).

I'm sure if I did enough research I could be a decent Pac-10 blogger. It probably wouldn't take too many visits to the L.A. Colosseum, the Bay Area, or Autzen to get a feel for the flavor of that conference's particulars. However, it would take decades to fully absorb it all and become one of the best.

By contrast, I have been living and breathing SEC football for about two and a half decades. I attended a member school and I've been to games at six of the twelve stadiums (plus Florida-Georgia in Jacksonville). I have a love and passion for the way this conference does its football, warts and all, and I like to think that comes through in the way that I write about it.

I'm sure all the telecasts will turn out mostly fine, especially since we know that Pam Ward will only be doing Big Ten games. It'll even be an upgrade over the lo-fi Raycom productions (though to their credit, the Raycom guys upgraded to HD last season). I just feel like we've lost something in the exchange besides that annoying Rascal Flatts song from last year.

The regional broadcasts were a bit messy, but the alternative is corporate sterility. I guess we'll find out which is better on Saturdays at noon this fall.