Share All sharing options for: What Happened to SEC Quarterbacks, Part II 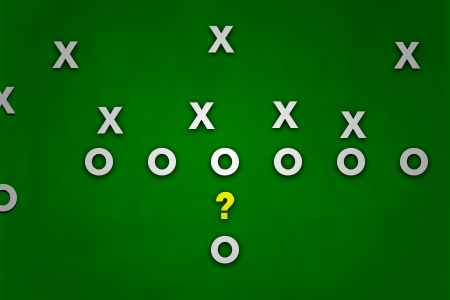 With the top six teams in passing efficiency of 2004 out of the way in part one, let's continue with the bottom six to see how SEC quarterbacks for 2009 compare with just a few years ago.

I like the potential that Smith has, but Cutler is not the kind of quarterback who comes to Vanderbilt every year. Heck, Cutler is not the kind of quarterback that comes to Vandy every decade. Adams is a serviceable option if something were to happen to Smith or his effectiveness, but at this point we know who and how limited he is. We'll have to see what Smith can do, but he's no Jay Cutler yet.

Pinkins was the starter in '04, but Newton ended up with more yards and touchdowns. Both got dinged up some as each were runners, Pinkins moreso than Newton, and some freshman guy named Blake MItchell even saw some mid-season work. Garcia also has some wheels, but with the headman now Steve Spurrier instead of Lou Holtz, his passing is more important. The situation in '09 is not that different than '04, it's just that there's only one guy instead of two.

I'll give you $10 if you're not a Tide fan and you could have named Guillon and Pennington both. Croyle was the clear Plan A, but he was lost for the season in a blowout win over Western Carolina in the season's third game. Guillon came in, but he lost his two starts and was benched. Pennington would then finish out the rest of the season, but he was no Croyle. McElroy won this off season's quarterback derby to replace John Parker Wilson. Whether he's better than the '04 situation depends on whether you look at the preseason prospects or the final results.

Verdict: Even (with everything averaged in)

Boyd was easily the starter, with Woodson only seeing time when Boyd was injured or at the end of blowouts. Still, he did quite well with the time he did have. Boyd did some things running the ball, but he completed just 52% of his passes in '04 and had more interceptions than touchdowns. Hartline was hardly a smashing success last year, though he no longer has to look over his shoulder at now-receiver Randall Cobb. We'll see how long that lasts. Boyd may not have been Maxwell Award material, but he at least was a senior, and Woodson showed promise for the future.

Snead is considered by many to be a legit Heisman Trophy candidate. But did you know the same was true for all three guys the Rebels played in 2004? [citation needed]

Verdict: Much, much better

Conner was still young in '04, and it showed. He missed a little time to injury but otherwise was the man in Starkville. As you can tell though, the Bulldogs finished last in the conference in passing efficiency. Lee would appear to be a good fit for Dan Mullen's new offense as he's a dual threat guy with spread offenses in his background. He's not that tall though, and he'll be looking over his shoulder at Russell.

So where does that leave us?

Three quarterback situations are better, five are worse, and four are roughly even. Out of the ones that are worse though, three (Auburn, Georgia, Vandy) are comparing to some of the best quarterbacks ever to play at their respective schools and only Auburn is in terrible shape for this year.

Earlier this week, Orson listed out the SEC quarterbacks of 1995 and came to this conclusion:

Regression to the mean is the norm in a multifactorial equation like that of quarterback production, and the current bubble of say, Big 12 passers is pretty much what you see in any major conference: around two guys who will get drafted, say one or two lesser but still notable qbs, and the rest are the Derrick Taites of the world, and will do quite well with a dealership or brokerage with their name on it one day.

I would tend to agree. Seeing as how quarterback is the most difficult position to play, it should be no surprise that there aren't usually more than two or three top-shelf guys in any given year. I think the perception that SEC quarterbacking is down comes from the bad situations from last year that carry over to this one (as Dr. Saturday cited), the fact that the Big 12 is at an unprecedented peak for quarterbacking, and that two of the SEC's presumed best guys (Snead and Ryan Mallett) are transfers from elsewhere.

There's nothing much to worry about, overall. The SEC quarterbacks of this year are about as they always are.