If you have never heard of the Internet Archive (archive.org), that's a shame. It's a storehouse of all kinds of interesting and wonderful things. I recently was searching through it and found a digitized copy of the book A Scientific and Practical Treatise on American Football for Schools and Colleges by Henry L. Williams and none other than Amos Alonzo Stagg. If you're not familiar with Stagg, he was a pioneer in many athletic pursuits but he's most famous for being one of the founding fathers of football along with guys like Walter Camp and Pop Warner.

The book was written in 1893, and it gives an overview of what the game was like at the time. It's very different from today, but you can still see where a lot of today's game came from. Another gem from the Internet Archive is a video clip of Michigan playing Stagg's University of Chicago team in 1903. It was filmed by Thomas Edison himself, and it shows that football at the time consisted largely one almost rugby-like scrum after another. Football was a dangerous game back then.

Anyway, here are a few of the basics about football in 1893 as laid out by the book.

Football was 11 on 11 by then, which was not always the case.

Position titles were identical for offense and defense. You had the rushers, also called forwards, who are akin to today's linemen. On offense, you had the center rusher, then aside him two guards, then aside them two tackles, and finally aside them, two ends. The other four players were the backs. The quarterback stood directly behind center, the two half backs were split behind him, and behind them was the fullback.

Defense was a bit different. The center, guards, and tackles were lined up against their counterparts, but the ends were way out wide. The backs were arranged so that two were close to the line and two were far back. Here's the general way teams lined up, according to some of the many diagrams in the book:

White is offense; yellow is defense.

The names of the backs on offense all make sense now, with them going from quarter to half to full as the distance from the line increases. The center, guards, and tackles always were blockers, and while the ends mostly blocked too, they also could be ball carriers. It's much like the way tight ends are used now. Later on in the book, the authors point out that some teams preferred to always use the same formation to get the element of surprise, while others varied formations greatly. The image above is the formation used in all of the book's diagrams, but it is by no means the only way teams lined up.

On defense you can see the basic structure of modern defenses, even if the names have changed. The center, guards, and tackles are like linemen, the ends are in the position of today's cornerbacks, the quarterback and left halfback are in linebacker positions, and the right halfback and fullback are out at safety.

The book has 69 different plays diagrammed. Of them, 37 are what we would consider fairly normal running plays like inside runs, counters, sweeps, and the like. Remember, the forward pass was not legalized yet. The remaining 32 plays are wedge plays, where most of the offense forms a wedge and the ball carrier runs behind it. Wedge plays (also known as mass momentum plays) were very dangerous, and they often led to serious injury and even death. Theodore Roosevelt threatened to ban football in 1905 because of that fact, and the result was the founding of what's now called NCAA in 1906 to standardize rules of collegiate sport. In it's first year, the organization banned mass momentum plays and legalized the forward pass.

Football did not yet have the same down system as the current game does. What we call downs were then called "scrimmages," though "down" was used as an occasional synonym. They also had only three scrimmages to work from instead of four. If a team failed to gain five yards or it lost twenty yards over the course of three scrimmages, it would lose the ball just like a turnover on downs in today's game. Punting was allowed, but it was not used often or effectively for four reasons according to Williams and Stagg:

Fair catches did exist, but you signaled it not by waving your hand in the air but by making a divot in the ground with your heel to show where you caught the ball.

There were three kinds of scores: touchdowns, goals, and safeties. Touchdowns and safeties were scored mostly as they are today: by a team getting across the other team's goal line or being downed behind its own. Goals were simply the same as today's field goals, and you could kick them either by drop kick or place kick (but not punting) just like now.

That's where the similarities pretty much end, aside from a safety being worth two points.

A touchdown was worth four points. After the touchdown, you tried for a goal that was worth two points. Where you kicked from was determined by where inside the end zone the ball carrier was downed. The goal was attempted from somewhere along a line perpendicular to the goal line from where he was downed. 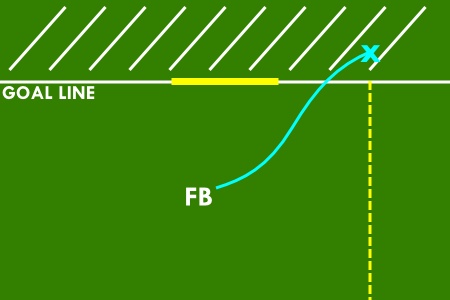 Let's say a fullback runs past the goal line for a touchdown. The point where he crossed the goal line is irrelevant. He kept going a bit and was downed at the X marking. His team would then attempt the goal kick from any spot of its choosing along the yellow dashed line.

The yellow thing in the middle of the goal line is the goal posts. Note that I haven't use the term "end zone," as it didn't exist yet.

A goal that didn't come after a touchdown was actually worth five points in those days. The reason? "The proportion of goals secured from drop kicks is not more than one in every four or five attempts, with the best kickers in America." Drop kicks were extremely unreliable and apparently place kicks for goals had yet to catch on. In fact, the authors caution that going for a goal should be used solely as "a last resource."

6 points for a touchdown with a goal after it

5 points for a goal

4 points for a touchdown without a goal

2 points for a safety

--Punting was considered to be a viable offensive strategy if you had a good punter and the other team had lousy catchers. Williams and Stagg said that a playing a "kicking game" with frequent punts was the most demoralizing strategy to an opponent if successfully executed. That's because your good punter would keep knocking the other team backwards on the field and the opponent, lacking a good punter, would not be able to equalize the effect.

--The book is full of excellent quotable material, and much of it still applies today. For instance: "The star runner as a rule is the one who suffers most from overwork through injudicious leadership." We see that today with workhorse running backs in the NFL that begin to break down at around age 30.

--On that note, the final chapter before the rule book at the very end is a three page list of axioms. Again, much of it pertains to today: get up immediately after being knocked to the ground without appearing hurt because otherwise the other team will think you're soft and go after you, never tackle the ball carrier forward, don't make excuses, etc.

Williams and Stagg would have loved Oklahoma from last season, because several axioms tell you to play an uptempo game. Examples:

The axioms continue on from there, and some ("Don't wait for the runner to meet you; meet the runner.") sound like they were torn from a coaching book written recently.

--The book is well over 200 pages, so there's a lot I didn't cover and haven't even read myself yet. Williams and Stagg go over many topics from strategy, to how to train for the game and deal with injuries, to the extreme specifics and minutiae of each position on the field. It's a fascinating look at the beginnings of the sport we all love, and it clearly shows what has changed and what hasn't.

If you're thirsting for something related to football that you haven't seen before during these July doldrums, you could do a lot worse than delving into this book. It's a PDF, and it's free.