Share All sharing options for: SEC 2009 // Stephen Garcia -- and the Rest of the Depth Chart

Not to put too fine a point on it -- everyone who has even bothered to preview the 2009 South Carolina Gamecocks has touched on this -- but a simple graph will explain the most important position on Steve Spurrier's depth chart this summer. 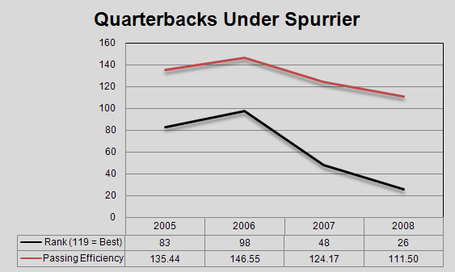 A note about the graph: I've already inverted the passing ranks -- i.e., 26 really means the Gamecocks were 93rd out of 119 programs in 2008 -- so that downward trend is indeed a negative sign.

Turning those numbers around is Stephen Garcia's challenge.

But the other concern about South Carolina's tentative depth chart (PDF) is the relative lack of experience. Couting both sides of the ball, 11 starters (by Phil Steele's count) return from a team that went 7-6 with a loss to Vanderbilt and uninspiring wins against dreadful UAB and FCS team Wofford. And then lost seven draft picks. For the other USC, losing seven draft picks is no big deal. For this one ...

Then again, the situation might not be quite as bleak as it looks. Rodney Paulk, who takes over at MLB for Jasper Brinkley, had 22 starts in 2006 and 2007, so he could be counted as a seventh returning starter on defense. He might be no Jasper Brinkley, but then J-Brink really wasn't what many expected in his return last season from injury (65 tackles, 5 for losses, including 2.5 sacks). There is only one true freshman listed as a first-team player (highly regarded CB Stephon Gilmore) and one redshirt freshman (RG T.J. Johnson). Yes, the Gamecocks lost a good deal of starters, but they aren't exactly green.

On the offensive side of the ball, the concerns are Garcia and the offensive line. Line coach Eric Wolford takes over to try to fix a problem that exacerbated the passing and rushing troubles for the Gamecocks last  year -- in other words, the entire offense. There is only one stated battle on the depth chart -- at LG, between Terrence Campbell and Lemuel Jeanpierre. But South Carolina has shown no hesitation in the past about shuffling the line if necessary, and listed backups like Quintin Richardson could see a substantial amount of playing time.

Some have already questioned how long Garcia will have before he gets the hook. The answer is "quite a while," but not because Spurrier has suddenly developed patience. He simply has no choice. Reid McCollum, Zac Brindise and Aramis Hillary, for all the promise they have shown in practice or are expected to show in the future, are not viable options for full-time replacements this year if Garcia goes south. If Spurrier is forced to go to his bench, the season might already be in trouble. Gilmore could see action at QB in some Wildcat-type formations.

As for the other skill positions: WR and TE spots are distributed among players who need to live up to the occassional flashes of brilliance (Moe Brown, Jason Barnes and Dion LeCorn at WR; Weslye Saunders at TE); RB might actually improve with Brian Maddox taking over for the much-maligned Mike Davis. Not that improvement from a 3.5 ypc average has to be something to write home about.

On defense, the return of Eric Norwood after his brief flirtation with the draft will bolster the unit, as will Paulk. But some of the younger players will have to step up, notably in the secondary. Coaches would prefer Darian Stewart, currently listed as the starter at SS, to play the hybrid Spur position. However, they don't appear willing to weaken the secondary to do it as long as there remains another acceptable candidate. Alonzo Winfield is the starter if Stewart stays put.

All of that is moot, though, if Garcia disappoints. This team lives and dies with him.