The SEC and Reality Distortion Fields

Share All sharing options for: The SEC and Reality Distortion Fields

Today is a huge day in the life of Apple, Inc. as the company's executives tag-team one of two giant annual keynotes. CEO Steve Jobs is on medical leave right now, but his performances in these keynotes are legendary. His presenting style is so effective among his faithful that he is said to wield a "reality distortion field." 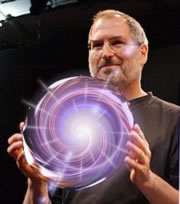 Only a slight exaggeration, courtesy of a Photoshop wizard whose name has been lost to me. Sorry, whoever you are.

Anyway, it got me to thinking: who in this conference wields the biggest and best reality distortion fields? Here are my top three:

I don't think I could illustrate it better than this FanPost by CornFromAJar at Rocky Top Talk does. I'm not out to demean the author, but just read the closing sentences:

So you don't "get" what's going on in Knoxville? I don't either necessarily, and I don't really feel the need to. I'm just watching, with more interest than any other time in recent years, and waiting for what's next.

Phillip Fulmer had to go because he didn't win enough games. Probably no one can survive two 5-win seasons in four years in Knoxville, regardless of resume. Make no mistake: Fulmer was not canned for being boring. He was pushed out for not winning enough.

So now, it's not necessary to "get" what's going on, all that matters is that it's interesting again? Interesting could have been accomplished by hiring Fulmer a colorful (and good) offensive coordinator like Gus Malzahn. Or, they could have hired Mike Leach (he of the 11-2 record last year) instead of Kiffin. Interesting doesn't matter; Hal Mumme, Jim Donnan, and Ron Zook were interesting, but it didn't save them their jobs.

I know the FanPost author doesn't speak for all of Vol Nation, but it's an increasingly common theme. "At least we're interesting/people are talking about us again." That follows the plan that Kiffin has been preaching about since February to a T, and a Power T at that. I suppose optimism always wins out at this time of year, but it's remarkable to me how quickly an outsider managed to sway the thinking of that fan base.

For all the grief that Saban gets for being gruff, unpersonable, or any other adjective with a negative connotation, he seems to have connected with Alabama fans on a deep level. We've seen "The Process" meme develop, and he's quite often referred to with "coach" in front of his name as though it's a required title like "doctor" or "the honorable" for judges.

The most interesting test case for me was the flap about whether he blamed any part, even the slightest sliver, of the Sugar Bowl loss to Utah on the fans. To me it sounded like a classic case of unintentional candor followed by near-immediate backtracking. Every coach does it at some point. kleph at Roll Bama Roll came out swinging in Saban's defense and made a very convincing argument, but its length testifies to the hold that Saban has on the fan base.

If you ever want to test it, simply bring up the topic of how long Saban will stay in Tuscaloosa. It's a fair question to ask (on occasion) for a guy who has had four different jobs in thirteen years as a headman. The correct answer, I believe, is that having seen life both in big time college football and the NFL, he knows he prefers the college game. Therefore, why would he leave one of the primo college jobs for anything else? Those two sentences are all you need, but if you get anything less than two paragraphs from an average Alabama fan, it'd probably be the first time.

Meyer is a clear No. 3 in this and has little chance of moving up, at least until and unless the top two guys head off for somewhere else. I've been a Gator long enough to know that no matter what, a good number of fellow fans will find something to complain about. It's the nature of the beast.

The best example of Meyer's RDF at work is probably in regards to the recently-discussed matter of there being 24 arrests since his tenure began. If you visit any Gator message board, you'll find a litany of excuses about it, from a count of how many were Zook recruits, to how many had their charges thrown out, to how arrest-happy (and for that matter, taser-happy) the Gainesville police is.

Remember, this is the same fan base that came up with the "Criminoles" taunt for FSU and still refers to Miami as "Thug U." I'm not saying that there's no element of truth in any of those reasons given for the arrests (because there is), but as the Orlando Sentinel's Andrea Adelson points out, the arrest rate for the team since 2005 is twice the rate for the general population. And plus, I became acquainted with hundreds of people during my time in Gainesville and not one ever got arrested.

Part of this is the classic "winning cures all" phenomenon that is to be entirely expected. Part of it, though, is a testament to the hold that Meyer has on the fan base.