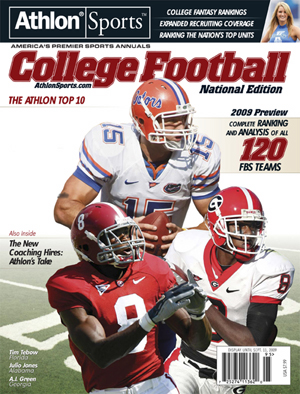 Athlon's preseason magazine is the third we've looked at here, after Lindy's and Phil Steele's. Interestingly, that also means we have our third different pick for SEC West champ.

Lindy's likes LSU, Steele is on the Ole Miss bandwagon, while Athlon is predicting a rematch of last year's SEC Championship Game. At least here in the preseason, it's reminiscent of the Big 12 South of last year with Oklahoma, Texas, and Texas Tech all at the top.

Here's the rankings Athlon has for the SEC teams among the nation:

A general consensus seems to be forming that in the East, Florida will win it but Georgia will be relatively close. Then, Tennessee will be the best outside this year's Big Five, with Arkansas close on the Vols' heels. It'll be a while before I put my name on any official predictions, but I'm can tell you not sold on all this. Not even close

If you're looking to get just one preseason magazine, Athlon should be at the top of your list. It, along with the SteeleBook, is one of the two most accurate publications over the last three, five, and ten years. However, Athlon's publication is pleasant and readable, as opposed to the information overload and eye assaulting design of Steele's magazine. I know a couple professional design people at work, and they might have an aneurysm if they ever saw Steele's annual tome. Plus, Athlon always includes some very interesting quotes from opposing coaches.

Steele's magazine is and probably will always be the most in-depth of them all. No one studies the game as Phil does; in fact, he alone probably does more work than the entire staffs of other publications. There's a reason why he affixes the JAMPACKED WITH INFORMATION tagline at the bottom of the cover.

Unless you're an obsessive though, you'll probably get through about a dozen pages before giving up. Flip through the offerings at your local magazine rack once Steele's releases next week, but if in doubt, go with Athlon.