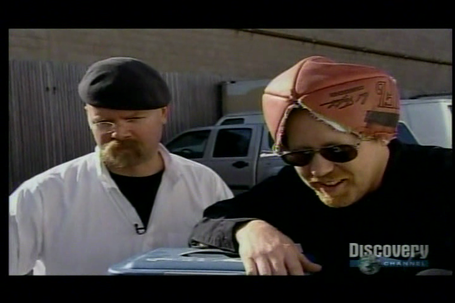 As narrator Robert Lee said, at 110 PSI you lose a football but gain a hat.

In honor of this being Vanderbilt Week around here, I decided to write up a quick piece on a football physics puzzle. Does filling a football up with helium make it fly farther?

In season four of the popular show MythBusters on Discovery, the titular truth seekers tested this very problem. It originates from Ray Guy, the former Oakland Raiders punter who was so good, the NFL invented the stat of hang time just for him. The story goes that in a game against Houston, Guy hit a punt so high that Oilers coach Bum Phillips requested the ball be taken off the field and tested for helium.

As you might imagine, Adam and Jamie discovered that a helium football at regulation pressure does weigh less than both a standard air-filled ball and even an empty one. The difference between the gases is only about seven grams, but it is there.

They first tested the balls with a local community college punter, but as you can imagine, the data wasn't nearly consistent enough. They tried it again in a NASA hangar with no wind and a pitching machine, but the difference between the two sets of data (air and helium) was not statistically significant. Simple field tests could not identify a difference between helium and air.

The two issues at hand are whether helium is springier than air—that is, that kicking a helium ball will result in a faster kick—and which gas makes the ball fly farther.

On the first account, they used a hammer on an A-frame to "kick" the balls and a high speed camera to measure them as they took flight. As it turns out, the speed when hit was identical regardless of what was inside the footballs. In this case, the answer is no: helium is not springier than air.

Now knowing that helium won't result in a faster kick, can we say which is better? Thanks to Isaac Newton, the answer is yes. The air-filled ball weighs more than the helium ball, and that means it has more inertia. It will offer greater resistance to slowing down than the helium ball will, and as a result it will go farther if given the same initial speed The myth is then busted right there, courtesy of Newton.

The helium football is basically the gridiron equivalent of a corked bat. The MythBusters tested the effectiveness of those illegal instruments in a later episode and found that cork actually decreases the speed at which the ball comes off the bat. While helium footballs don't present a noticeable disadvantage as corked bats do, neither gives an physics-based advantage. Any perceived or real gain from either is entirely psychological.