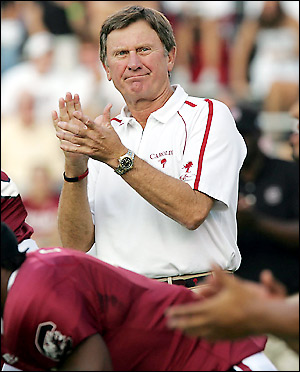 SEVENTH IN A SERIES :: The 2008 South Carolina Review

As I write this, I am listening to the album Emphasis! (On Parenthesis) by the Stanton Moore Trio. I feel like the title fits for South Carolina.

South Carolina is coached by Steve Spurrier, offensive genius! (who has yet to engineer a top 40 scoring offense in Columbia). He's a quarterback guru too! (who's yet to have a decent quarterback there). The defense has been pretty good too! (except when it's not).

The cliché at this point would be to state that things haven't gone as expected for Spurrier since he's been to Columbia. But what does that even mean? A lot has to do with your own personal expectations for him when he got there. This is a program that has never been to a bowl game in three consecutive seasons and whose conference titles and 10 win seasons combined can be counted on two fingers. It resides in a state that is not blessed with bountiful talent from which to recruit, and it has to go up against a half dozen established powers in its own conference alone.

Spurrier placed the Gamecocks second in the SEC East in 2005, beat Florida in the process, and finished with a 5-3 SEC record for only the third time since joining the SEC. In 2006 they won eight games, something that's happened just six times since 1980. In 2008, Spurrier guided them to their third bowl in his first four years, something that no other South Carolina coach has done. SC has also been at or above .500 in each of his four seasons, the first such four year stretch since 1987-90. Four-year periods of .500+ ball have happened just five times since World War II, and they've never been longer than four.

The most puzzling aspect of it all for me is the lack of good quarterbacking. So far, the quarterback play under Spurrier in Columbia hasn't been up to the standards of Eric Kresser, much less those of Shane Matthews, Rex Grossman, or Danny Wuerffel. Given the hailstorm of interceptions last year, Steve would probably just take a Noah Brindise if he could.

This could be the year when things work out behind center though. Stephen Garcia is said to be the best quarterback Spurrier has recruited to South Carolina, and he is one of just two four-star singal callers (along with the now-departed Chris Smelley; according to Rivals) the Ol' Ball Coach has brought in. Thanks to staying clean in the off season, Garcia has now actually attended an entire spring practice, and new quarterbacks coach G.A. Mangus could be an upgrade over David Reaves given his impressive resume. Being a former Spurrier quarterback, Mangus would certainly know the offense inside and out.

Of course, that assumes the offense is worth knowing still. Too many people to count have declared that Spurrier has lost his touch, that he's washed up, and that people have figured out his schemes. Not so said Heath Cline, a sports radio host in Columbia who's also worked in Florida and whose word I'd value 50 times more than random national pundits who don't watch South Carolina play much:

Spurrier's still as good a playcaller as he ever was, and his system still works. There were plenty of times last year where receivers were open and the quarterback either didn't make the read, made a bad throw, or was getting sacked. No Spurrier offense can work correctly without a QB. In four years in Columbia, he hasn't one worth a darn yet.

I can back that up anecdotally. I watched Spurrier's coach show several times last season, and it was full of him saying things like, "Well, we had a receiver open over on the weak side, but we didn't make the read right and now we make a bad throw."

Replacing WR Kenny McKinley and TE Jared Cook will be tough, but the Gamecocks have plenty of big receivers for Garcia to throw to. They'll need to step up their play in light of those losses, of course, but there is talent there. Freshman RB Jarvis Giles impressed in the spring game and he could catch some passes out of the backfield too. There are pieces here for a good passing game, and Giles brings hope to the running game. Remember, all of Spurrier's best offenses have had good running elements to them (Errict Rhett, Fred Taylor, Earnest Graham, etc.) along with the passing.

For all of this to go, the offensive line will have to gel and quickly though. A new offensive line coach Eric Wolford has come in to try to solve the problems of injury and inconsistency that have plagued the Gamecock line over the past four years. He and Mangus are just two parts of a coaching staff overhaul that ideally will pay immediate dividends.

South Carolina is one of the most divisive teams among the early consensus, and it's not hard to see why. There's no broad agreement on how Garcia will shape up, how the defense will deal with its losses, and whether Spurrier is the answer in Columbia. There's enough there for hope though, and for the endlessly devoted Gamecock fanbase, that's probably all they need.