Share All sharing options for: SEC 2009 // How Good is Arkansas, Really? 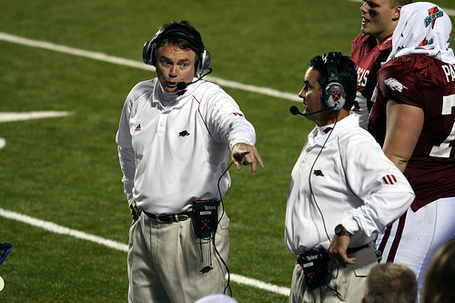 'You try winning the SEC with fans filing open request records for your text messages.'
via farm1.static.flickr.com (by krissikes)

There are only three current SEC members who have never won the conference title. Two of them -- South Carolina and Vanderbilt -- will come as no surprise. The third team is Arkansas.

Part of this is a function of history; the Razorbacks joined the league in 1992 after a 76-year run in the Southwest Conference that saw them claim 13 conference crowns, seven of them outright. The 13 titles was third all time in the SWC behind Texas and Texas A&M. But Arkansas also has an interesting, perhaps dubious, distinction.

The Hogs are the only team to go to the SEC Championship Game more than once since the title game began in 1992 without winning.

The fact that Arkansas has even won more than one division title leaves them just outside the upper half of the league -- the other names on that list are Florida, Alabama, Tennessee, LSU, Georgia and Auburn. (Mississippi State has won one; Ole Miss, Kentucky, South Carolina and Vanderbilt have never been.)

Of course, conference games are sometimes tough draws. The 1995 Arkansas team ran into a Florida team that didn't lose a game until getting annihilated by Nebraska in the de facto national title game, the Fiesta Bowl. A 2002 visit to Atlanta featured the Razorbacks squaring off against the Georgia Bulldogs, who went 13-1 that year and ended up ranked third in the nation. There was another chance, though, in 2006, when the Hogs played -- eventual national champion Gators. Even for a game as tough as the SEC Championship Game should be, Arkansas' luck has been ridiculously bad.

So where does Arkansas fit in the SEC from a historical standpoint? Do we really put them up there with the luminaries who have at least one crown? Can we justify dropping them down into the second tier, where teams who have gotten to Atlanta never or once linger?

To an extent, of course, the question is a ridiculous one to ask of either Arkansas or South Carolina, who haven't even been in the league 20 years. And, with regards to some of the other programs, a championship game played just 18 times so far is probably not the fairest measure.

No one is expecting Arkansas to get to Atlanta this year, which is just as well. They would be destined to run into what is expected to be another buzzsaw -- the Gators (again), this time playing for a shot at a repeat national title and maybe the first undefeated season in school history.

But it wouldn't surprise me to see them make it in 2010. Maybe it will be a fair fight for once.