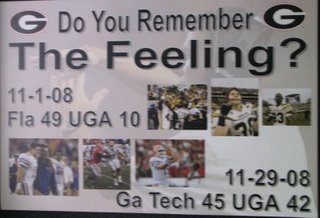 In theory, bulletin boards in locker rooms should not be necessary. Football is a game of passion, and so players should play with it at all times. For some guys, football is the raison d'être for them being in college at all. It's what pays for their scholarships and potentially earns them big money on the next level.

And yet, as we all know from seeing our teams come out flat and lose a game they shouldn't, all of that is not enough. Players still need external motivation. They still need to get yelled at or get a kick to the seat of their pants to play up to their highest level consistently. Dramatic locker room speeches are as big a part of football lore as are Hail Marys and last second field goals.

As coverage of college football has increased over the last several years, it seems like more and more we learn about the motivational tactics that coaches use to fire up players. The concept of "bulletin board material" is nearly as old as the single wing, and that's a road well traveled. Now, as you can see with the picture at the top of this post, coaches are creating their own based on past events to try to focus players.

The first thing of this kind I can remember hearing of was that, after losing to Florida in the national title game, Ohio State changed the four digit security code of its athletics complex to 4114 to reflect the final score of the game. I'm sure things like this have existed for longer, but that's the first I can remember. Georgia now has signs about 49-10 all over its football complex, as well as some about its loss to Georgia Tech.

The national champion Gators? Yup, they have permanent space reserved for the biggest games of each year: 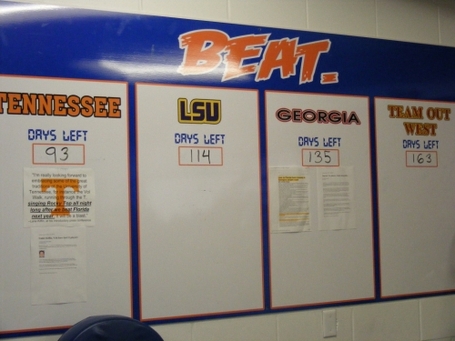 via Friends of the Program

There's plenty more where that came from too. You're right in assuming the things under Tennessee include a Lane Kiffin quote, though the second one curiously is about 11 players leaving the program (huh?). I can't tell what's under Georgia, but I'd imagine its something about Mark Richt's comments regarding potentially moving the site of the UF-UGA game out of Jacksonville. If you're not familiar, or couldn't tell, "Team Out West" (sometimes, "School Out West") is what Urban Meyer says instead of "Florida State," which he tries to use as sparingly as possible. Dan Mullen continues that kind of tactic at Mississippi State by calling Ole Miss the "School up North."

As everything in college football gets bigger every year, so too have the motivational tactics. Do you have any favorites? My personal favorite is when opposing players call out Tim Tebow by name, because Florida is undefeated when that's happened. Anybody else got one they particularly like?