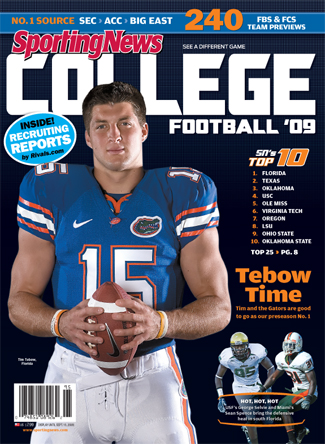 The Sporting News' preseason magazine is the last of the four major ones that are out that we've looked at here, and it breaks the three way tie between Alabama (Athlon's pick), Ole Miss (Phil Steele's pick), and LSU (Lindy's pick) atop the SEC West. TSN has the Rebels taking that side with LSU second and the Crimson Tide third. That is also the only of the four that does not have Alabama either No. 1 or No. 2 in the division.

TSN's mag does not have a 1 through 120 list like the others do, so all there is to report is its picks for the divisions, which are as follows:

If you've been following along with these, you'll note a couple other interesting order changes beyond Alabama in third in the West. This is the only magazine with Tennessee fourth in the East behind South Carolina, and it is also the only one so far with Auburn ahead of Arkansas in the West.

Thanks to this entry in the series, South Carolina and Vandy are now the teams with the highest variance (aside from the three-way mambo on top of the West). The Gamecocks are picked anywhere from third (TSN) to fifth (Athlon). The Commodores are picked as high as fourth (Athlon) and as low as sixth (Lindy's, TSN).

For now I am keeping my picks for this fall a secret, if only because I like to reveal them right before the season with as much information available to me as possible. Yeah, it's a cop out of sorts, but it's worked well for me in the past. I'll at least say this: none of the magazines have exactly mirrored my provisional order for right now, and given that none of them ever get things exactly right, it makes me feel better about mine.

A quick look at last year's consensus reveals that there's plenty of picks to go before we call it an offseason. Among those yet to be counted towards this year's include the seemingly bizarre Congrove Computer Rankings at College Football Poll Archive (Six undefeated teams, among them Michigan State? Really?) and the sketchy looking yet most accurate of 2008, Surefire Scouting.