Graduation Rates and Those who Leave Early

Share All sharing options for: Graduation Rates and Those who Leave Early 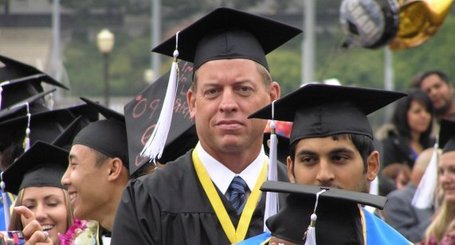 On Monday, I ran across this story about Troy Aikman going back and getting his degree from UCLA. It's always a nice story when you see guys like that go back and finally get their diplomas.

When people do that, it almost always elicits a positive reaction. I only say "almost" because of Vince Carter and his graduation day fiasco. In any event, everyone loves to see that.

The flip side of it though is that every athlete who goes back and gets a degree didn't finish it the first time around. Therefore, they are a drag on the school's graduation rates. When a player leaves early for the pros, it's a black mark on the university's record.

There are various measures for graduation rates, including some created by the federal government and the Academic Progress Rate, a metric the NCAA uses to judge programs and sometimes take away scholarships. The newest one from the NCAA is the Graduation Success Rate, which is the first one I know of that doesn't penalize schools for transfers. It looks at where the athlete was at the time of transfer, and if he or she was on track to graduate, then the school doesn't get hit with anything if the player later fails out of the new school.

No measure I know of though accounts for players that leave early for professional leagues and succeed there. The purpose of college is not simply to get students diplomas; it is to prepare students for whatever their next vocation is. If the person can succeed without finishing college, then that's not a failure on the university's part. There are plenty of successful people who either did not go to or did not finish college (including the current richest man in the world).

To be clear, I'm not trying to downplay the important of getting a degree. I earned two of them before leaving Gainesville. There's definite merit in doing so.

Troy Aikman was a hall of fame quarterback and is now a successful member of the sports media. In the NCAA's eyes though, he is a black mark on its academic record. Does that make sense? Of course not but of course, folks celebrated his matriculation without thinking once about 20-year-old graduation rates. Perhaps that's the main reason why this issue never gets addressed and changed.